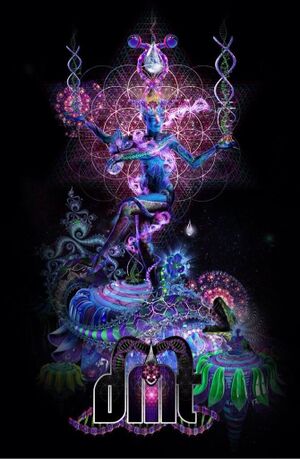 As of June 2017 nobody has ever made a modification in a organism to produce DMT.

This article contemplate the research that is going on in this subject.

Simplified steps to achieve the goal

The theory - Research on how to do the gene modification

Biosynthesis of DMT in humans

Dimethyltryptamine is an indole alkaloid derived from the shikimate pathway.

the biosynthesis of DMT is relatively simple.

L-tryptophan that we cosume is transformed in DMT in 4 step listed below.

Humans cannot produce L-tryptophan, so we need to eat it. Tryptophan is a routine constituent of most protein-based foods or dietary proteins. It is particularly plentiful in milk, yogurt, cottage cheese, red meat, eggs, etc. 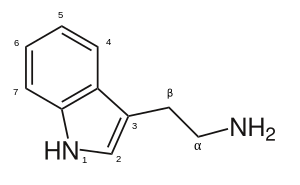 Tryptamine then undergoes a transmethylation

(step 2): the enzyme indolethylamine-N-methyltransferase (INMT) catalyzes the transfer of a methyl group from cofactor S-adenosyl-methionine (SAM), via nucleophilic attack, to tryptamine. 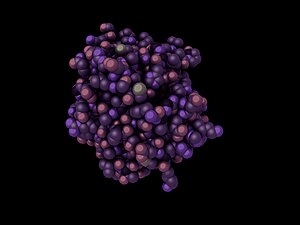 N-Methyltryptamine (NMT) has been found in the bark, shoots and leaves of several plant genera, including Virola, Acacia, Mimosa

[1][2] NMT is in turn transmethylated by the same process

(step 3) to form the end product N,N-dimethyltryptamine. Tryptamine transmethylation is regulated by two products of the reaction: SAH,[3][4][5] and DMT[3][5] were shown ex vivo to be among the most potent inhibitors of rabbit INMT activity.

This transmethylation mechanism has been repeatedly and consistently proven by radiolabeling of SAM methyl group with carbon-14 (14C-CH3)SAM).[1][3][5][6][7]

DMT and the human DNA

Dmt in humans is created with genes located in Chromosome 7.

the genes are listed below

In enzymology, an Amine N-methyltransferase (Template:EC number) is an enzyme that is ubiquitously present in non-neural tissues and that catalyzes the N-methylation of tryptamine and structurally related compounds.[8]

The chemical reaction taking place is:

Thus, the two substrates of this enzyme are S-adenosyl methionine and amine, whereas its two products are S-adenosylhomocysteine and methylated amine. In the case of tryptamine and serotonin these then become the dimethylated indolethylamines dimethyltryptamine (DMT) and bufotenine.[9]

A wide range of primary, secondary and tertiary amines can act as acceptors, including tryptamine, aniline, nicotine and a variety of drugs and other xenobiotics.[8]

N-methylation of endogenous and xenobiotic compounds is a major method by which they are degraded. This gene encodes an enzyme that N-methylates indoles such as tryptamine. Alternative splicing results in multiple transcript variants. Read-through transcription also exists between this gene and the downstream FAM188B (family with sequence similarity 188, member B) gene. [provided by RefSeq, Nov 2010]

DNA above is two steps away from the translation done by the ribosome. DNA is transcribed into RNA by DNA transcriptase, RNA is translated into proteins by ribosomes. But we are interested in the DNA that we can put into the organism, so that is why I worked my way backwards to DNA.

The enzyme uses pyridoxal phosphate, the active form of vitamin B6, as a cofactor. Template:Phenylalanine biosynthesis

The basic idea is to extend the metabolic pathway of e coli by inserting new genes into it. The genes code for proteins that make it happen (exactly like described in https://en.wikipedia.org/wiki/N,N-Dimethyltryptamine#Biosynthesis). It is possible to buy synthetic genes on plasmids from the internet for a few hundred dollars. Plasmids are circular strings of DNA that, when bought from synthesizers also often encode for resistance against some form of antibiotics, such as amplifilin. The idea is that after you have inserted the plasmid into a colony of E. coli, you add the antibiotic specific to the plasmid in order to kill off all individual organisms that did not absorb the plasmid. Insertion of genes with the help of a plasmid vector is very well described and can be done in a kitchen. There are youtube tutorials. For example, https://www.youtube.com/watch?v=slY4qrnZIM8.

L-Tryptophan, one of the 22 essential amino-acids (which exist in all living bodies), is transformed into DMT through interaction with two enzymes: AAAD (Aromatic L-amino acid decarboxylase) and INMT (Amine N-methyltransferase).

E. coli lacks both these enzymes.

These enzymes consume co-enzymes that are available in the e.coli.

(You can look up the available chemicals in e coli and their relationship with its genome by using ecocyc.org or biocyc.org.)

If E.coli contained AAAD and INMT, they would interact with other chemicals present in the cell and produce new chemicals. Going through the list of all chemicals that can interact with the two enzymes, I found that AAAD would produce the phenetylamine and tyramine as a by-product. This is important, as ingesting tyramine in combination with a mono-amine oxidase inhibitor (MAOI) could cause hypertensive crisis. This could be lethal to a psychedelic user ingesting the product.

I took the code for the enzymes from uniprot.org and compiled them into the DNA. For procaryotes this means that one simply translated each amino-acid into codons (DNA-basepair triplets) that code for them.

The other parts it took from the biobricks project: An annual competition held by universities to teach students to genetically modify organisms into doing various mostly useful things. (http://parts.igem.org/Catalog?title=Catalog) The biobricks project is also quite a useful place to start off ones own studies, its very pedagogical.

The central dogma of genetics is that DNA is transcribed into RNA, that is then translated into sequences of amino-acids. These sequences are proteins, and enzymes are proteins.

The promoter recruits transcriptional machinery, that attach to the DNA and transcribes it into mRNA.

The RBS binds the mRNA to ribosomes, that translates the mRNA into amino acids.

The rest of the gene below, with the exception of the terminator, is code that will be translated into enzymes. Both enzymes start with methodine, which is also a start-codon. This means that no "cutting and pasting" is needed. Between the code that translates to the enzymes, there are stop codons and a spacer that does not initiate translation.

Makes the ribosome stop translation. The ribosome continues its travel down the single-helix RNA though, so it will encounter the next enzyme-encoding sequence as well.

Does nothing at all, just to separate the proteins in space, and give the ribosome a chance to properly emit the INMT before beginning on the AAAD.

Terminates translation and makes the ribosome emit the protein.

Terminator that forms a physical loop out of the single-helix RNA equivalent. The loop is formed by the palindrome contained within the sequence. Read more about it at biobricks wiki under the topic terminators.

Appling the theory to actually modify a organism

Buy the gene on a plasmid from some online shop

with the knowledge of the genes needed to produce DMT you have to send it to a Online shops selling synthetic DNA and buy it on a plasmid.

Introduce the plasmid into a population of chosen organisms

with the plasmid in hands you have to introduce it on a organism like E.coli

Dry the biomass and harvest it using straight to base, or similiar

using some of Tek Extractions

There has been a lot of reseach on online forums on how to create a organism that produces dmt using genetic engineering. Here is a list of most important threads on this subject.