From PsychonautWiki
(Redirected from Fentora)
Jump to navigation Jump to search

Fentanyl (also known as Fentanil and by the brand names Sublimaze,[2] Actiq, Durogesic, Duragesic, Fentora, Matrifen, Haldid, Onsolis, Instanyl,[3] Abstral,[4] Lazanda[5] among others[6]) is a potent opioid substance of the anilidopiperidine class. It is a strong agonist at the μ-opioid receptors and approximately 40 to 50 times more potent than pharmaceutical grade (i.e. 100% pure) heroin[7][8] and roughly 80 to 100 times more potent than morphine.[citation needed]

A wide range of pharmaceutical fentanyl preparations are available, including transdermal skin patches, lollipops, buccal tablets or patches, nasal sprays, and inhalers.[9] On the street, it is typically encountered in powder form, where it is often cut into or sold as heroin and other drugs, which has resulted in numerous accidental overdoses and fatalities.[10] In 2016, fentanyl and analogues were the most common cause of overdose deaths in the United States at more than 20,000, about half of all opioid-related deaths.[11][12]

Subjective effects are similar to those of heroin and includes pain relief (analgesia), sedation, respiratory depression, and euphoria. However, it has a rapid onset and short duration of action relative to other opioids, which can lead to compulsive redosing. Additionally, many users report noticeably less euphoria with fentanyl and its analogs. As a result, it is generally considered to have low recreational value.

Fentanyl is a highly dangerous substance due its addictiveness and the difficulty with which it can be safely dosed, a result of its incredible potency. Users are advised to be aware of the extreme risk they are placing themselves in if they choose to use fentanyl. Users are also advised to test all of their opioids (and substances in general) for fentanyl and other adulterants using reagent testing kits.

Fentanyl was first synthesized by Paul Janssen in 1960[13] following the medical inception of pethidine several years earlier. Janssen developed fentanyl by assaying analogues of the structurally related substance pethidine for opioid activity.[14] The widespread use of fentanyl triggered the production of fentanyl citrate which entered the clinical practice as a general anesthetic under the trade name Sublimaze in the 1960s. Following this, many other fentanyl analogues were developed and introduced into medical practice, including sufentanil, alfentanil, remifentanil, and carfentanil.

In the mid-1990s, fentanyl was first introduced for widespread palliative use with the clinical introduction of the Duragesic patch. It was followed in the next decade by the introduction of the first quick-acting prescription formulations of fentanyl for personal use, the Actiq lollipop and Fentora buccal through the delivery method of estradiol Mylan transdermal patches. As of 2012, fentanyl was the most widely used synthetic opioid in clinical practice[15] with several new delivery methods now available, including a sublingual spray for cancer patients.[16][17] In 2013, 1700 kilograms were used globally.[18]

Fentanyl is a member of the anilidopiperidine class of synthetic opioids. Its structure features a piperidine ring bound at its nitrogen constituent RN to a phenyl ring through an ethyl chain. The opposite carbon of the piperidine ring is bonded to the nitrogen member of a propanamide group, a three carbon chain with a nitrogen constituent adjacent to a carbon bonded to a ketone oxygen. This propanamide group is also substituted with an additional phenyl ring at RN.

The recreational effects of fentanyl occur because opioids structurally mimic endogenous endorphins which are naturally found within the body and also work upon the μ-opioid receptor set. The way in which opioids structurally mimic these natural endorphins results in their euphoria, pain relief and anxiolytic effects. This is because endorphins are responsible for reducing pain, causing sleepiness, and feelings of pleasure. They can be released in response to pain, strenuous exercise, orgasm, or general excitement.

Fentanyl's strong potency compared to that of morphine is mainly due to its high lipophilicity (the ability of a chemical compound to dissolve in fats, oils, and lipids). Because of this, it can more easily penetrate the central nervous system in comparison to other opioids. 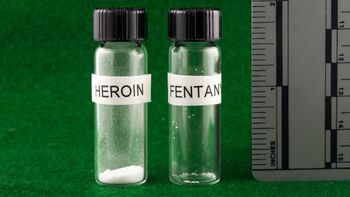 Fentanyl by New Hampshire state police forensic lab - This image serves as a portrayal of lethal doses for heroin and fentanyl.

Non-medical use of fentanyl by individuals without opiate tolerance can be very dangerous and has resulted in numerous deaths.[19][20] It is potentially fatal at heavy dosages and even those with opiate tolerances are at high risk for overdoses. Once the fentanyl is in the user's system, it is extremely difficult to stop its course because of the nature of absorption. Because of the extremely high strength of pure fentanyl powder, it is very difficult to dilute appropriately, and often the resulting mixture may be far too strong and, therefore, very dangerous. It is also potentially lethal when mixed with depressants like alcohol or benzodiazepines.

Like most opioids, pure fentanyl at appropriate dosages does not cause many long-term complications other than dependence and constipation. Outside of the extremely powerful addiction and physical dependence, the harmful or toxic aspects of opioid usage are exclusively associated with not taking the necessary precautions in regards to its administration, overdosing and using impure products.

Fentanyl is very potent and around 1000 times more permeable than morphine.[21] Even though fentanyl uptake through skin is rather slow[22], unintentionally transporting the substance from the skin by touching the mouth, nose or eyes is dangerous.

Heavy dosages of fentanyl can result in respiratory depression, leading onto fatal or dangerous levels of anoxia (oxygen deprivation). This occurs because the breathing reflex is suppressed by agonism of µ-opioid receptors proportional to the dosage consumed.

Fentanyl can also cause nausea and vomiting; a significant number of deaths attributed to opioid overdose are caused by aspiration of vomit by an unconscious victim. This is when an unconscious or semi-conscious user who is lying on their back vomits into their mouth and unknowingly suffocates. It can be prevented by ensuring that one is lying on their side with their head tilted downwards so that the airways cannot be blocked in the event of vomiting while unconscious (also known as the recovery position). In the case of an overdose, it is advised to administer a dose of naloxone intravenously or intramuscularly to counteract the effects of the substance.

As with other opioids, the chronic use of fentanyl can be considered extremely addictive with a high potential for abuse and is capable of causing psychological and physical dependence among certain users. When addiction has developed, cravings and withdrawal symptoms may occur if a person suddenly stops their usage.

Tolerance to many of the effects of fentanyl develops with prolonged and repeated use. The rate at which this occurs develops at different rates for different effects, with tolerance to the constipation-inducing effects developing particularly slowly for instance. This results in users having to administer increasingly large doses to achieve the same effects. After that, it takes about 3 - 7 days for the tolerance to be reduced to half and 1 - 2 weeks to be back at baseline (in the absence of further consumption). Fentanyl presents cross-tolerance with all other opioids, meaning that after the consumption of fentanyl all opioids will have a reduced effect.

The risk of fatal opioid overdoses rise sharply after a period of cessation and relapse, largely because of reduced tolerance.[23] To account for this lack of tolerance, it is safer to only dose a fraction of one's usual dosage if relapsing. It has also been found that the environment one is in can play a role in opioid tolerance. In one scientific study, rats with the same history of heroin administration were significantly more likely to die after receiving their dose in an environment not associated with the substance in contrast to a familiar environment.[24]