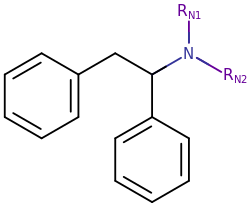 General chemical structure of a diarylethylamine

Diarylethylamines are a chemical class of psychoactive substances that produce dissociative effects when administered. Subjective effects are similar to those of arylcyclohexylamine dissociatives like PCP or ketamine, although they differ in their chemical structure.

Diarylethylamines are examples of contemporary designer drugs specifically chosen to mimic and/or replace the functional and structural features of commonly used illicit substances. They have been marketed on the online research chemicals market as a replacement for MXE and other dissociatives.

Very little is known about the human pharmacology, metabolism, and toxicity of these compounds. Many reports suggest that they may pose different and more pronounced risks than traditional dissociatives.