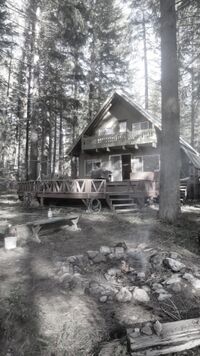 Cabin by Josikins - This image serves as an example of a colour depression.

Color depression (also known as acquired color blindness[1]) is defined as the experience of colors becoming darker, less saturated, and less distinguishable from one another. During this experience, reds may seem “less red”, greens may seem “less green”, etc and all colours will likely have become much greyer and less distinct to look at than they comparatively would be during everyday sober living. At higher levels, this effect can result in the external environment appearing to be black and white, monochrome, and completely devoid of color.

Color depression is often accompanied by other coinciding effects such as visual acuity suppression and double vision. It is most commonly induced under the influence of heavy dosages of antipsychotic[2] compounds, such as quetiapine, haloperidol, and risperidone.