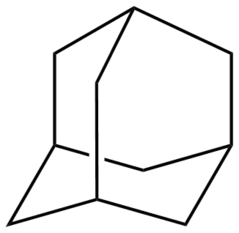 Adamantanes are a chemical class of organic compounds that are based on the adamantane structure. Members of this class have various pharmacological actions which includes dopaminergic stimulation and NMDA receptor antagonism. Memantine and bromantane are two prominent members of this class.

In the 1960s, the adamantane derivative amantadine was developed as an antiviral drug for the treatment of influenza. Other adamantane antivirals subsequently followed, such as rimantadine and adapromine.[1] It was serendipitously discovered in 1969 that amantadine possesses central dopaminergic psychostimulant-like properties,[2] and subsequent investigation revealed that rimantadine and adapromine also possess such properties.[3]

Amantadine was then developed and introduced for the treatment of Parkinson's disease due to its ability to increase dopamine levels in the brain. It has also notably since been used to help alleviate fatigue in multiple sclerosis. With the knowledge of the dopaminergic psychostimulant effects of the adamantane derivatives, in the 1980s was developed bromantane as "a drug having psychoactivating and adaptogen properties under complicated conditions".[4]

The psychotropic activity spectrum of many adamantane-containing compounds is determined by the nature of their amine substituents, their positions in the polycyctic nucleus, and the basicity of the amino groups. Many have been demonstrated to possesses central dopaminergic psychostimulant-like properties. Some adamantanes produce blocking of the open channels of NMDA and n-cholinergic receptors. It was found that some the derivatives of adamantane markedly increases the production of acetylcholine in the frontal cortex and hippocampus.[3]

In 2004, it was discovered that amantadine and memantine bind to and act as agonists of the σ1 receptor (Ki = 7.44 µM and 2.60 µM, respectively), and that activation of the σ1 receptor is involved in the central dopaminergic effects of amantadine at therapeutically relevant concentrations. These findings may also extend to the other adamantanes such as adapromine, rimantadine, and bromantane, and might potentially explain the psychostimulant-like effects of this family of compounds.[6]