There are various ways in which users measure their dosages of psychoactive substances. The most accurate and safe method to measure one's drugs is to use a combination of a milligram scale and the volumetric liquid dosing method. This is a vastly far safer route than "eyeballing" one's dosages by approximating the weight of what they are ingesting simply by looking at it and making a rough (but inaccurate) guess.

Avoid using personal cards (e.g. ID or debit card) to line up substances, including halving doses below 10 mg that have been weighed with a milligram scale; If you're going out and get caught, here is a risk that the police will swab your card with color-tests reagents to indicate if your card is contaminated with illegal substances. 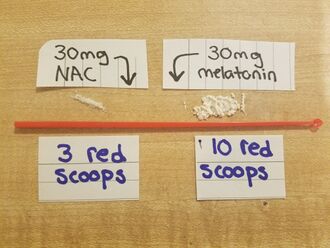 This picture shows why eyeballing using microscoops is not an accurate and reliable form of measurement.

Eyeballing is strongly discouraged in any context. Eyeballing is a highly inaccurate method of measuring substances which involves looking at a substance and making a rough guess of the weight. Since there is not much difference between 10mg and 30mg visually, it can result in one taking too much of a substance.[1] There are numerous forms of eyeballing methods, including using micro scoops and the graph paper method.

Users should not trust a vendor's word that their product weighs a certain amount as it is not unheard of for vendors to accidentally or intentionally give out the wrong amount of a product (both more than advertised or less), which can result in overdoses for some users.[2]

It is especially dangerous to eyeball substances that are active at extremely low doses (under 10mg) and have sensitive dose-response curves.

Milligram scales under $1000 cannot accurately weigh out doses below at least 50mg and are highly inaccurate under 10-15mg, for more accurate readability add the included calibration weight to the scale without taring before you add a 10+ mg dose. For more potent drugs, users are strongly advised to use volumetric liquid dosing.

When buying chemicals in powdered form, it is strongly recommended that one invest in a reliable and accurate digital milligram scale to ensure that they are ingesting a safe and recommended dosage. A simple $20-30 investment in such equipment can be the difference between a safe and enjoyable experience, and a negative and dangerous one.

To achieve the most accurate measurement, the scale should only be used on a completely flat surface away from vibrations, wind, and drafts. Low batteries can also affect the scale's accuracy, so one should occasionally replace them.[3]

There are a huge variety of different scales available online through various sites. To choose a quality scale, users should read the reviews before buying and come to their own personal decision. Users should ideally choose a scale that has a 0.001 g readability. When using a scale that has 0.005 gram (5 mg) accuracy, the weight will be off by 5 mg in either direction, meaning that if one measures 20mg of a substance, the results will be between 15-25 mg.

For general purpose usage, the following products can be used. Some of these scales below are recommended by TripSit.[5] The scales are sorted by maximum quantity because a 0.001 x 20 g scale will provide better accuracy than a 0.001 x 100 g scale. 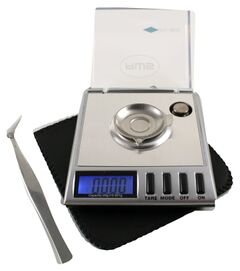 The Gemini-20 model, is one of the most popular portable milligram scales. These can be purchased from the links listed in the list.

Most milligram scales are more accurate in higher ranges (5 - 15 grams) than the lower ranges. Therefore, it is better to weigh one's drug while the included calibration weight is on the scale. The following steps outline the weighing method for the most accurate measurement:

Volumetric liquid dosing should preferably be used for potent drugs because most standard milligram scales cannot accurately weigh out doses below 10-15mg.[6]

Volumetric liquid dosing is the process of dissolving a known quantity of a compound in a liquid medium in order to make it easier to measure and accurately dose. In the interest of harm reduction, it is essential to prepare certain compounds which are too potent to measure with traditional weighing scales within a liquid solution. Please see the above article for more information about this form of measurement.