Writing styles establish conventions that enable constructive collaboration and improved communication across articles on the site. This page documents the PsychonautWiki "house style" for published content.

Select the bolded words when faced with a choice between the two options.

Linking is usually limited to the first occurrence of the word or phrase in each article. This is because using too many wiki-links makes articles difficult to read. Adding multiple links for the same term may be acceptable in long articles in which linked instances of the term are very far apart.

Please make sure to keep internal links whole, so that does not include dangling letters or phrases.

Every edit must include a concise, descriptive summary of what was changed and the reasoning or evidence behind it (if applicable). The exception to this is if it is marked as a "Grammatics" change, which we define as minor changes to grammar, formatting (e.g., adding a bracket or removing a line of space), or changes in word and phrasing that does not alter the original meaning of the text. We reserve the right to revert changes immediately and without comment to any change that lacks a commentary summary.

Please respect the edit summary spaces by not vandalizing them, using them to inject personal commentary or as a means of inviting community discussion. If one wishes to start a discussion about the change or article itself, they are welcome to use the page's "Talk" section, which can be accessed by clicking the tab labeled "Discussion" near the top left corner of the page. 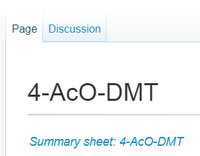 Option one should be the default formatting for substances (one sentence). However, for substances with multiple effects of note that result in long sentences, please resort to the two sentence structure shown below.

Like other substances of its class, particularly DAF and XCA, it primarily [induces vs. produces] a state referred to as "mega fucked up," albeit the extent to which this occurs is highly dose-dependent and variable in effect. (Description of distinguishing properties compared to other substances?) Its most common routes of administration include oral, sublingual or nasal administration. (Remark on common RoAs if relevant)

Due to its potent X and Y effects, reported habit-forming properties as well as unknown toxicity profile, it is strongly recommended that one use proper harm reduction practices if choosing to use this substance.

Flags (or tags) are templates that can be appended to text to signify a need for verification, revision, or other purposes. The most common kind is the missing citation flag or "cite flag" that appears in the form of [citation needed] wherever {{citation needed}} is added in the raw text for an article.

The various kinds of flags available for use are listed below: