Anadenanthera peregrina (also known as Yopo, Jopo, or Cohoba) is a perennial tree native to the Caribbean and South America.

The beans of the Anadenanthera pergrina plant have been noted to contain significant quantities of bufotenin alongside lesser amounts of 5-MeO-DMT and DMT, all of which have a long history of use as entheogens. It has been used for ritual and healing purposes for thousands of years.

Some tribes use yopo along with Banisteriopsis caapi to increase and prolong the visionary effects.[citation needed]

Snuff trays and tubes similar to those commonly used for yopo were found in the central Peruvian coast dating back to 1200 BC, suggesting that insufflation of Anadenanthera beans is a more recent method of use.[citation needed] Archaeological evidence of insufflation use within the period 500-1000 AD, in northern Chile, has been reported.[3]

Some indigenous peoples of the Orinoco basin in Colombia, Venezuela and possibly in the southern part of the Brazilian Amazon make use of yopo snuff for spiritual healing. Yopo snuff was also widely used in ceremonial contexts in the Caribbean area.[citation needed] 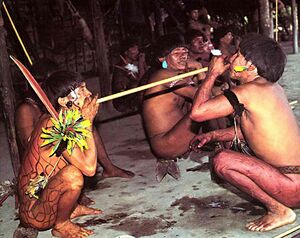 Yopo snuff is usually blown into the user's nostrils by another person through bamboo tubes or sometimes snuffed by the user using bird bone tubes. Blowing is more effective as this method allows more powder to enter the nose and is said to be less irritating. In some areas, the unprocessed ground beans are snuffed or smoked producing a much weaker effect with stronger physical symptoms.

Inhaling Yopo can cause considerable pain in nostrils. However, this pain usually subsides within minutes. Physical effects include tingling and numbness throughout the body and an increased heart rate. The hallucinatory effects follow as colors become enhanced and shapes appear to morph. The effects of Yopo intensify quickly but gradually fade and are replaced by nausea and general bodily discomfort.

When taken orally by some tribes in South America, small amounts are often combined with alcoholic chichas (maize beer). Moderate doses are reported to be unpleasant, producing nausea and vomiting. The beans were a main ingredient in bilca tauri, an oral purge medicine used to induce ritual vomiting once a month.[4] Large amounts are not usually consumed orally; as many tribes believe oral use is dangerous.

The effects of insufflated DMT and 5-MeO-DMT are relatively short acting. The experience lasts about 10 minutes but can take an hour to get back to baseline, while the effects of oral use yopo typically last 2–3 hours. Of the three main compounds present, only oral use bufotenin lasts 2–3 hours. The beans have been found to contain up to only 0.04% 5-MeO-DMT and 0.16% DMT.[5] This suggests that they play only a minor role (if any) in the experience, as psychoactive levels of either substance would require an impractical amount of beans to be used.

For this reason, the effects of yopo are primarily attributed to the hallucinogenic properties of bufotenin (5-HO-DMT).

Prohibited to import any plant or plant products (including seeds) of Piptadenia peregrine (syn. Anadenanthera peregrina) by customs, effective 21 AUG 2021.

Located in the category of Part 3-Dangers to the community -> Division 1—Serious drugs and precursors -> Controlled plants. Criminal Code Regulations 2019 (made under Criminal Code Act 1995). [6]