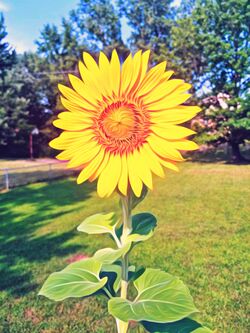 Liquidated sunflower by reddit user /u/sincitysaint - This image serves as an example of texture liquidation as seen applied to a sunflower.

Texture liquidation is defined as the experience of the texture, shape, and general structure of objects and scenery appearing progressively simplified, smudged and stylized in such a way that one's external environment begins to take on the general appearance of a painting or cartoon.

Texture liquidation is often accompanied by other coinciding effects such as acuity enhancement and drifting. It is most commonly induced under the influence of moderate dosages of psychedelic compounds, such as LSD, psilocybin, and mescaline.