Terence Kemp McKenna (November 16, 1946 – April 3, 2000) was an American ethnobotanist, mystic, psychonaut, lecturer, and author who spoke and wrote about a variety of subjects, including psychedelic drugs, plant-based entheogens, shamanism, metaphysics, alchemy, language, philosophy, culture, technology, and the theoretical origins of human consciousness. He was called the "Timothy Leary of the '90s",[1][2] "one of the leading authorities on the ontological foundations of shamanism",[3] and the "intellectual voice of rave culture".[4]

Terence McKenna advocated the exploration of altered states of mind via the ingestion of naturally occurring psychedelic substances.[5][6] For example, and in particular, as facilitated by the ingestion of high doses of psychedelic mushrooms,[7][8] ayahuasca and DMT,[9] which he believed was the apotheosis of the psychedelic experience. However, he was less enthralled with the synthetic drugs[10] stating that "I think drugs should come from the natural world and be use-tested by shamanically orientated cultures...one cannot predict the long-term effects of a drug produced in a Laboratory."[11] McKenna always stressed the responsible use of psychedelic plants saying: "Experimenters should be very careful. One must build up to the experience. These are bizarre dimensions of extraordinary power and beauty. There is no set rule to avoid being overwhelmed, but move carefully, reflect a great deal, and always try to map experiences back onto the history of the race and the philosophical and religious accomplishments of the species. All the compounds are potentially dangerous, and all compounds, at sufficient doses or repeated over time, involve risks. The library is the first place to go when looking into taking a new compound."[12] He also recommended and often spoke of taking, what he called, 'heroic doses,'[13] which he defined as five dried grams of psilocybin mushrooms,[14] taken alone, on an empty stomach, in silent darkness and with eyes closed.[15][16] Stating that when taken this way one could expect a profound visionary experience,[17] believing it is only when slain by the power of the mushroom that the message becomes clear.[18]

Although he avoided giving his allegiance to any one interpretation (part of his rejection of monotheism), he was open to the idea of psychedelics as being "trans-dimensional travel"; proposing that DMT sent one to a "parallel dimension"[19] and psychedelics literally, enabled an individual to encounter 'higher dimensional autonomous entities'[20] or what could be ancestors, or spirits of the Earth,[21] saying that if you can trust your own perceptions it appears that you are entering an "ecology of souls."[22] McKenna also put forward the idea that psychedelics were "doorways into the Gaian mind"[23][24] suggesting that "the planet has a kind of intelligence, it can actually open a channel of communication with an individual human being" and that the psychedelic plants were the facilitators of this communication.[25][26] In a more radical version of biophysicist Francis Crick's hypothesis of directed panspermia; another idea McKenna speculated on, was that psilocybin mushrooms are a species of high intelligence,[27] which may have arrived on this planet as spores migrating through space[28] and are attempting to establish a symbiotic relationship with human beings. He postulated that "intelligence, not life, but intelligence may have come here [to Earth] in this spore-bearing life form" pointing out that "I think that theory will probably be vindicated. I think in a hundred years if people do biology they will think it quite silly that people once thought that spores could not be blown from one star system to another by cosmic radiation pressure" and believed that "Few people are in a position to judge its extraterrestrial potential, because few people in the orthodox sciences have ever experienced the full spectrum of psychedelic effects that are unleashed."[29][30][31][32]

During the final years of his life and career, McKenna became very engaged in the theoretical realm of technology. He was an early proponent of the technological singularity[33] and in his last recorded public talk, Psychedelics in The Age of Intelligent Machines, he outlined ties between psychedelics, computation technology, and humans.[34] He also became enamored with the Internet calling it "the birth of [the] global mind",[35] believing it to be a place where psychedelic culture could flourish.[36]

McKenna spoke of hallucinations while on DMT in which he claims to have met intelligent entities he described as "self-transforming machine elves.

"So I did it and...there was a something, like a flower, like a chrysanthemum in orange and yellow that was sort of spinning, spinning, and then it was like I was pushed from behind and I fell through the chrysanthemum into another place that didn't seem like a state of mind, it seemed like another place. And what was going on in this place aside from the tastefully soffit indirect lighting, and the crawling geometric hallucinations along the domed walls, what was happening was that there were a lot of beings in there, what I call self-transforming machine elves. Sort of like jeweled basketballs all dribbling their way toward me. And if they'd had faces they would have been grinning, but they didn't have faces. And they assured me that they loved me and they told me not to be amazed; not to give way to astonishment."

McKenna formulated a concept about the nature of time-based on fractal patterns he claimed to have discovered in the I Ching, which he called novelty theory,[3][5] proposing this predicted the end of time in the year 2012.[5][6][7][8] His promotion of novelty theory and its connection to the Mayan calendar is credited as one of the factors leading to the widespread beliefs about 2012 eschatology.[9] Novelty theory is considered pseudoscience.[10][11]

The stoned ape theory is a controversial theory by Mckenna proposed in his book Food of the Gods, that the transformation from humans' early ancestors Homo erectus to the species Homo sapiens mainly had to do with the addition of the mushroom Psilocybe cubensis in its diet,[17][37][38] an event that according to his theory took place in about 100,000 BCE (this is when he believed that the species diverged from the Homo genus).[39][40] McKenna based his theory on the main effects, or alleged effects, produced by the mushroom[29] while citing studies by Roland Fischer et al. from the late 1960s to early 1970s.[41][42]

McKenna stated that due to the desertification of the African continent at that time, human forerunners were forced from the increasingly shrinking tropical canopy in search of new food sources.[43] He believed they would have been following large herds of wild cattle whose dung harbored the insects that, he proposed, were undoubtedly part of their new diet, and would have spotted and started eating Psilocybe cubensis, a dung-loving mushroom often found growing out of cowpat.[43][32][44] 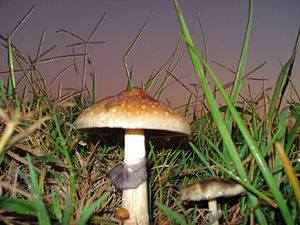 McKenna's hypothesis was that low doses of psilocybin improve visual acuity, meaning that the presence of psilocybin in the diet of early pack hunting primates caused the individuals who were consuming psilocybin mushrooms to be better hunters than those who were not, resulting in an increased food supply and in turn a higher rate of reproductive success.[29][32][17][44] Then at slightly higher doses, he contended, the mushroom acts to sexually arouse, leading to a higher level of attention, more energy in the organism, and potential erection in the males,[29][32] rendering it even more evolutionarily beneficial, as it would result in more offspring.[17][44][38] At even higher doses, McKenna proposed that the mushroom would have acted to "dissolve boundaries," promoting community bonding and group sexual activities.[45][44] Consequently, there would be a mixing of genes, greater genetic diversity, and a communal sense of responsibility for the group offspring.[46] At these higher doses, McKenna also argued that psilocybin would be triggering activity in the "language-forming region of the brain", manifesting as music and visions[29] thus catalyzing the emergence of language in early hominids by expanding "their arboreally evolved repertoire of troop signals."[32][17] Also pointing out that it would dissolve the ego and "religious concerns would be at the forefront of the tribe's consciousness, simply because of the power and strangeness of the experience itself."[44][46]

Therefore, according to McKenna, access to and ingestion of mushrooms was an evolutionary advantage to humans' omnivorous hunter-gatherer ancestors,[17][47] also providing humanities first religious impulse.[48] He believed that psilocybin mushrooms were the "evolutionary catalyst"[29] from which language, projective imagination, the arts, religion, philosophy, science, and all of human culture sprang.[32][33][36]

McKenna's "stoned ape" theory has not received attention from the scientific community and has been criticized for a relative lack of citation to any of the paleoanthropological evidence informing our understanding of human origins. His ideas regarding psilocybin and visual acuity have been criticized by suggesting he misrepresented Fischer et al., who published studies about visual perception in terms of various specific parameters, not acuity. Criticism has also been expressed due to the fact that in a separate study on psilocybin-induced transformation of visual space Fischer et al. stated that psilocybin "may not be conducive to the survival of the organism".[49] There is also a lack of evidence that psilocybin increases sexual arousal, and even if it does, it does not necessarily entail an evolutionary advantage. It may even be a disadvantage in the context of the presumed higher sexual competition in Homo Erectus as indicated by its higher sexual dimorphism relative to Homo sapiens.Template:R Others have pointed to civilisations such as the Aztecs, who used psychedelic mushrooms (at least among the Priestly class), that didn't reflect McKenna's model of how psychedelic-using cultures would behave, for example, by carrying out human sacrifice.[45] Although, it has been noted that psilocybin usage by the Aztec civilisation is far removed from the type of usage on which McKenna was speculating.[44] There are also examples of Amazonian tribes such as the Jivaro and the Yanomami who use ayahuasca ceremoniously and who are known to engage in violent behaviour. This, it has been argued, indicates the use of psychedelic plants does not necessarily suppress the ego and create harmonious societies.[44]

One of the main themes running through McKenna's work, and the title of his second book, was the idea that Western civilization was undergoing what he called an "archaic revival".[29][17][50]

His notion was that Western society has become "sick" and is undergoing a "healing process", in the same way that the human body begins to produce antibodies when it feels itself to be sick, humanity as a collective whole (in the Jungian, sense) was creating "strategies for overcoming the condition of dis-ease" and trying to cure itself, by what he termed as "a reversion to archaic values." McKenna pointed to phenomena including: surrealism, abstract expressionism, body piercing and tattooing, psychedelic drug use, sexual permissiveness, jazz, experimental dance, rave culture, rock-n-roll and catastrophe theory, amongst others, as his evidence that this process was underway.[51][52][53] This idea is linked to McKenna's "stoned ape" theory of human evolution, with him viewing the "archaic revival" as an impulse to return to the symbiotic and blissful relationship he believed humanity once had with the psilocybin mushroom.[17]

In differentiating his idea from the "New Age", a term that he felt trivialized the significance of the next phase in human evolution, McKenna stated that: "The New Age is essentially humanistic psychology '80s-style, with the addition of neo-shamanism, channeling, crystal and herbal healing. The archaic revival is a much larger, more global phenomenon that assumes that we are recovering the social forms of the late neolithic, and reaches far back in the 20th century to Freud, to surrealism, to abstract expressionism, even to a phenomenon like National Socialism which is a negative force. But the stress on ritual, on organized activity, on race/ancestor-consciousness – these are themes that have been worked out throughout the entire 20th century, and the archaic revival is an expression of that."[29][30]