From PsychonautWiki
(Redirected from Stemetil)
Jump to navigation Jump to search

Prochlorperazine (Compazine, Stemzine, Buccastem M, Stemetil, Phenotil) is a dopaminergic D2 receptor antagonist that belongs to the phenothiazine class of antipsychotic agents that are used for the treatment of nausea and vertigo. It is also a highly potent typical antipsychotic and is 10–20× more potent than chlorpromazine. It is also used to treat migraine headaches.[1]

Additionally, there is a three carbon propyl chain bound at R10 to the nitrogen atom of the structure. The propyl chain is bound at its terminal carbon to a piperazine ring at R1. Piperazine is a six-membered saturated ring with two nitrogen atoms at positions 1 and 4. The piperazine ring of prochlorperazine is also substituted at R4 with a methyl group. Prochlorperazine is found in pills as a maleate. It is analogous to chlorpromazine, another antipsychotic phenothiazine.

Prochlorperazine is thought to exert its antipsychotic effects by blocking dopamine receptors.[2]

Prochlorperazine is analogous to chlorpromazine; both of these agents antagonize dopaminergic D2 receptors in various pathways of the central nervous system. This D2 blockade results in antipsychotic, antiemetic and other effects.

Nervous system side effects have been associated with the use of prochlorperazine. Extrapyramidal side effects such as acute dystonic reactions, pseudoparkinsonism (not to be confused with Parkinson's disease), or akathisia can affect 2% of patients at low doses, whereas higher doses may affect as many as 40% of patients.[3][4]

As with other antipsychotics, dependence can be present with long-term use and is both physical and psychological dependence. When physical dependence has developed, withdrawal symptoms may occur if a person suddenly stops their usage. 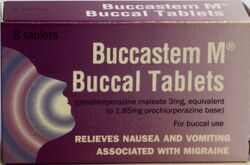 An 8-pack of Buccastem M, the brand name for OTC prochlorperazine maleate in the UK.