According to the study by Dr. Štarha,[1] all varieties of peyote contain approximately 0.7 mg of mescaline per gram of living plant. Both Lophophora diffusa and Lophophora fricii are found to be low in mescaline and high in pellotine. 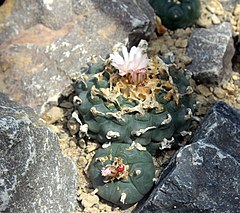 Two peyote with flowers. The smaller one has a red fruit.

Peyote (Lophophora williamsii) is the most well known and potent psychedelic cactus, although the smallest and slowest growing. Instead of growing upward to form a column, it grows as "buttons" low to the ground. It has been used by Native Americans for over 5000 years. Unlike other psychedelic cacti, the peyote plant and its seeds are controlled substances in the USA; however, federal and state religious freedom restoration acts allow its use in religious ceremonies. In addition to mescaline, it contains the the alkaloid hordenine (N,N-dimethyltyramine).[2] Hordenine is a selective MAO-B substrate and thus may function as a competitive inhibitor, preventing the breakdown of mescaline to some extent.[3]

Other Lophophora cacti such as Lophophora diffusa, Lophophora fricii, Lophophora koehresii... are low in Mescaline and high in Pellotine; so they produce different psychoactive effects than Lophophora williamsii. 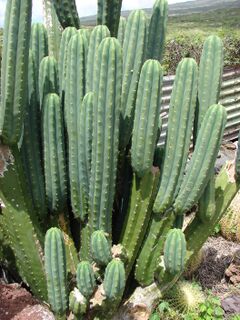 Notice the thickness and branching of San Pedro compared to cacti of the same genus. 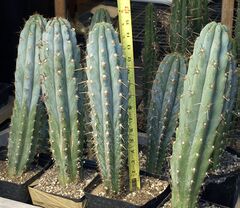 Notice the similarity to San Pedro.

Peruvian torch (Echinopsis peruviana) is more consistently psychoactive than San Pedro, though potency still varies greatly. It has a higher ratio of mescaline to other alkaloids than San Pedro. Its history of use by indigenous people goes back 2000-3000 years. Many regional varieties and hybrids exist. Peruvian Torch is one of the least well-defined and most varied species in its genus. Because of this, and because it is generally considered more desirable than San Pedro, San Pedro and hybrid cacti are often represented as Peruvian Torch. Like San Pedro, growing it without the intent to utilize its psychoactive properties is legal in many areas. In South America it is sometimes referred to as San Pedro, as are various psychoactive cacti in the same genus.

Bolivian torch (Echinopsis lageniformis) is widely regarded as the most consistently psychoactive and potent columnar cactus. It is faster growing than San Pedro or Peruvian Torch, though it is thinner than either. It is believed to have more hordenine relative to mescaline than Peruvian Torch. The monstrose cultivars are slower growing forms which branch into many sections. The two monstrose cultivars are the long form clone A which has longer sections that are smooth and spineless except for the base, and the short form clone B with small sections that grow long spines. There are also crested variants. Despite being one of the most consistently potent psychedelic columnar cacti, it is not commonly grown for its mescaline content outside of its native range. 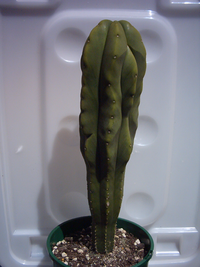 Potted Echinopsis scopulicola. The tapered shape is a result of several replantings in larger pots. Otherwise it grows similarly to peruvianus or pachanoi.

This cactus is also native to Bolivia, and it can form hybrids with the thinner bridgesii. It shares its range and forms hybrids with the other Echinopsis (Trichocereus) cacti. The green layer of the skin contains approximately 0.82% mescaline.

This large columnar cactus is native to northwest Argentina and the western slopes of the Andes in Peru, Bolivia, and Ecuador. The alkaloid content has been found to be anywhere from 0.005-2.375% mescaline. It is the largest of the psychoactive cacti.

Notice this is the largest cactus in the genus.

These cacti are similar to psychedelic ones. 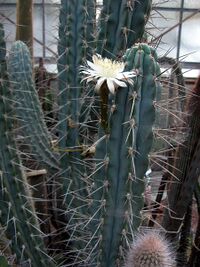