In chemistry, isomers are compounds with the same molecular formula but different structural formulas. Isomers do not necessarily share similar properties unless they also have the same functional groups. There are many different classes of isomers, like stereoisomers, enantiomers, geometrical isomers, and others. There are two main forms of isomerism: structural isomerism and stereoisomerism (spatial isomerism).

"Cis–trans isomers" are used to describe any molecules with restricted rotation in the molecule. However, these descriptors only describe relative stereochemistry based on group bulkiness or principal carbon chain so that it can be ambiguous. This is especially problematic for double bonds that have more than two substituents.

E/Z isomers which have restricted rotation within the molecule, specifically isomers containing a double bond, are configurational isomers. For alkenes with more than two substituents, the E-Z notation is used instead of cis and trans. If possible, E and Z is also preferred in compounds with two substituents. 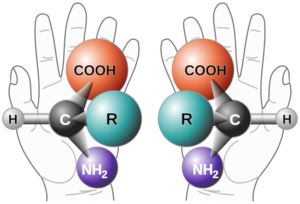 Two enantiomers of a generic amino acid that is chiral.

An enantiomer is one of two stereoisomers that are mirror images of each other that are non-superimposable (not identical). The model used to convey the idea of isomers being non-superimposable is a person's hands. One's left and right hands are the same except for opposite orientation. Organic compounds that contain a chiral carbon usually have two non-superimposable structures. A chiral carbon is a carbon attached to four completely different functional groups. The enantiomers will have a "left-hand" and a "right-hand" molecule. This property is used in naming the isomers: the "right-hand" is given the prefix (R), and the "left-hand" is given the prefix (S). Enantiomers rotate in plane-polarized light, and this property is also used in naming the enantiomers as either clockwise (prefix of dextro- or +) or anti-clockwise (prefix of levo or -).

A chiral molecule is a type of molecule that has a non-superimposable mirror image. The feature that is most often the cause of chirality in molecules is the presence of an asymmetric carbon atom, where the carbon is attached to four entirely different functional groups.

Most biological molecules (proteins, sugars, et al.) are present in only one of many chiral forms, so different enantiomers of a chiral drug molecule bind differently (or not at all) to target receptors. One enantiomer of a drug may have a desired beneficial effect while the other may cause severe and undesired side effects, or sometimes even beneficial but entirely different effects.

One example of this is with the dissociative drug DXM. DXM, or dextromethorphan, is the isomer that rotates clockwise in plane-polarized light. It has antitussive (cough suppressant) and dissociative effects. Levomethorphan is the isomer that rotates anti-clockwise in plane-polarized light. This difference in rotation can radically alter the effects and character of the drug; for example, levomethorphan is an opioid painkiller. 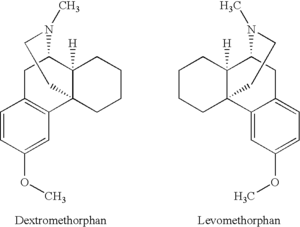 Two different chiral forms of methorphan can give rise to radically different effects.

In chemistry, a racemic mixture, or racemate, is one that has equal amounts of left- and right-handed enantiomers of a chiral molecule. A racemic mixture is the most common forms chemicals (psychoactive or not) end up synthesized as.

Pharmaceuticals may be available as a racemate or as the pure enantiomer (enantiopure), which might have different potencies and effects. Because biological systems have many chiral asymmetries, pure enantiomers frequently have very different biological effects. Examples include glucose and methamphetamine.[2]

A sample with only a single enantiomer is an enantiomerically pure, enantiopure or homochiral compound.