The night was still very young, as it was around 22:00, when R and I thought: “Why don’t we do some 2C-E again tonight, but this time without holding back?!” We had both used it before, but were hesitant and gradually increased the dose. Later, we heard that the dose should be consumed at once for the full effects to manifest. Otherwise it’s mostly the duration that increases.

We both wanted to really go for it and consumed a line of approximately 20mg. I went first and instantly endured intense pain in my nose. It felt as if my cavities were chemically burning and I decided to lay down on a couch for a bit. When R noticed the tears in my eyes, a slight doubt appeared in his. Almost immediately afterwards, he jumped up, went straight for the mirror and took a dive into the deep with me, like a true friend!

While my nose was still sore, everything started to wave and the atmosphere got a bit grim. I didn’t feel at ease, walked outside and threw up, which somehow didn’t bother me whatsoever.

Inside the caravan, I felt out of place anyway. The air was filled with cigarette smoke and it was very crowded. I was quite overwhelmed and thought: “Let’s take some speed, that should suppress most of the effects.” However, I was completely confused by the concept of a mirror and therefore had to ask a friend of mine to prepare it and even hold it at my nose.

R and I decided to go for a walk towards our town. During the walk, I told him that I felt uneasy and that I was going home to sit the trip out in my quiet bedroom. He went back and I walked home. When I got there, I stood in front of my house, saw the lights were still on and thought to myself: “What the fuck am I doing?! I just consumed a drug of which I was eager to explore its potential, only to be going home right after that? Aside from that, how on earth am I going to explain my current state to my mother, who’s still up?”

I too turned around and walked back to the shack. When I entered, everybody started cheering. They not only were displeased by me leaving, it was also a terrible idea to go to where my mother was, as fucked up as I was.

They were discussing whether or not they were going out at this point. A friend of mine was willing to bring us, but he wasn’t sure if he’d be joining as well, because he had two exams the next week.I got excited, since I had never done anything like that under the influence of psychedelics! R, on the other hand, was in doubt. I told him that the car ride itself was already an amazing adventure, based on previous experiences I’ve had and that it was impossible to comprehend. That got him to get in, but without any further promises.

During the ride, the doubt he had didn’t disappear and when we arrived at the club, he decided to head back with the driver. It turned out his mother’s last words before he left home were “You’re not going out, are you?” and those words had been echoing in his mind the entire time.

I, myself, didn’t want to bring my bag with me, because attached to the bag were worries.

I left it in the car, to later find out that I had left my keys and phone in it…

Well, so be it, I decided that nothing could ruin my mood and accepted the fact that I was in one of the highest stages of fucked up and on an adventure. Ready to acquire the knowledge of yet another experience! We walked towards the entrance and stood in line, where already the music flowed through me and I was looking forward to the security gate.

What would I currently look like? Ah, whatever, they know me!

I got frisked quite thoroughly and walked on. My ID was scanned as usual, but I didn’t understand the 18 and over stamp anymore, because I already got an entry stamp. When I figured that part out, I put the protecting cover of my ID back in my wallet, but wtf… Where was my ID? The head of the security tapped on my shoulder and said:

He laughed and said: “Dude, are you on drugs again?”

He rolled his eyes and turned around to continue his work at the entrance. With great effort, I managed to put the card back in my wallet. The party was on!

I walked up to the cloakroom, handed in my jacket and lit a cigarette. Afterwards I decided to have a look around. At that moment it started getting confusing. Vague acquaintances, more familiar people and friends. They all started talking to me, one after another: “Hey man! How are you doing! Long-time no see!” To which I didn’t know what a proper reply could possibly be, so I remained silent. I did enjoy all the attention, though. For now it was important to get myself some coins and soon the first challenge presented itself!

I had to manage purchasing coins, by paying with my card.

A nice machine was placed in front of me, with which I had had the goofiest fake phone conversations in the past, when I was on XTC. But this time, I had to use it for real, which I found a terrifyingly difficult task, when thinking about it. After that moment of doubt, I thought to myself:

“If I can pull this off… If this goes the way it should in the first try… I can do anything!”

And of course, miraculously, it went perfectly!

We positioned ourselves in the main room where Partyraiser was performing tremendously as usual. Looking across the room, I was amazed by all that I perceived. My vision was under the influence of my hearing and everything was partying. Everything, meaning not only people, but also the music, the lighting and the surroundings!

For a second I proceeded to try dancing, but after two short movements, it already felt uneasy. Therefore, I decided to sit down and started fistpumping like an idiot. Every now and then I nodded to some of the people that walked past me. The (amazingly friendly, yet not very intelligent) crowd, of which I had recently been thinking: “Are these still the type of people I want to be associated with?”, were now entirely connected with me. At least, that’s how it felt to me.

From time to time, I rubbed my stomach. Ever since I had thrown up, a bloated feeling persisted, which was a tad annoying, but I had decided to be at peace with it.

My friend and I walked around a little and everywhere we went, it was very sociable. I wasn’t talkative myself, because I experienced an extremely difficult time keeping up with conversations, but I could enjoy watching others have a blast about things that made no sense whatsoever.

Two girl-friends of ours came to have a chat with us and I was still unaware of how social interactions were supposed to go down. Because of that, I decided to just apologize as soon as I got the chance:

“I am unable to comprehend what the conversations are about, because I’m currently tripping.”

This wasn’t a problem.

The same faces kept passing by, which was very interesting, since I could study those people because of this. I observed and criticized all the people I saw, but I didn’t express any of that. It felt fun to think stuff, and powerful that nobody could hear or see what I thought.

We went to the toilet and the friend I had assigned as tripsitter went into a cubicle first, to take a leak and snort some. (I only now think of this, I had decided that a friend of mine was my grip on reality and I had asked him if he could deliver me home, no matter the state I was in. This gave me a save, somewhat careless feeling during the trip.) I stood outside the cubicle, waiting and he was going to leave a line for me as well. It is highly likely that less than 5 minutes had passed, but it became clear that I wasn’t capable of maintaining a grip on reality without him. I didn’t trust my entire perception and judgement and started wondering if he was even still in there. I carefully asked if he was still there. YES! He still was! I went into the cubicle, snorted the line and walked out, right after that.

From time to time I smoked a cigarette and all together I just enjoyed what took place in my mind and how I could see and observe all that took place. A girl-friend came to me and offered me a drink. In my experience, this was the sweetest thing ever! It developed the feeling that no matter what happened, whatever the situation may be, I had others looking after me. At this point, I was extremely satisfied with my life, because I have so many friends. Not just people who I can have a good time with, but people who are actually there for me, even when times get hard.

My night proceeded and I felt content even though I hadn’t been doing anything the entire night. I was just sitting at the bar, watching two girls, who were complete strangers, dance in front of me. I have honestly no clue whatsoever about who they were or if they were good looking, but for a good fifteen minutes, I’ve been staring at their butts like a pervert. I didn’t really care about what others thought of me, I just really appreciated it!

In the back of my head, it did function as a clear signal: “When on earth are you going to try hitting on someone again?!”

I decided to remember this message, so that I could act on it some other moment. I realized how obviously this moment, where the simplest social interactions puzzled me, wasn’t exactly perfect for sweeping a girl off her feet. 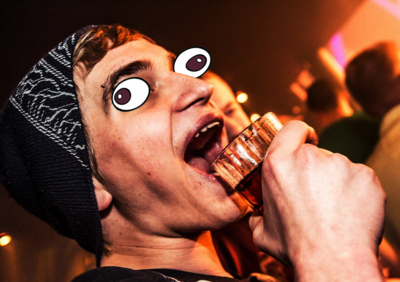 It was about four ‘o clock now and I noticed that the effects started to wear off. On the one hand, this bummed me out and seemed really short to me. On the other, I was happy with it, because I turned back into my old self. From four ‘till five, I have done nothing but goof around on a stupidly low level.

For some time, me and some other guy even addressed all the girls that walked by, by whistling and saying: "Hey little girl!" with a Moroccan-Dutch accent.

It didn’t really make sense, but it didn’t have to.

The security and I had a good talk as well and after just a little struggling, we managed to get ourselves a ride home. Which only consisted of a tiny detour, because of a slide where some of the passengers just had to make use of! Other than that, we just smoked one more cigarette, to calm ourselves down before we went home.

When I got home, I couldn’t sleep and saw tiny visuals from time to time. Nonetheless, I greatly enjoyed the adventure and would describe it as an amazing experience.

Would I do it again? I don’t think so, but I’m not sure. It was important to me to have at least tried it once and though I had a blast, at a party I would rather dance like there’s no tomorrow.