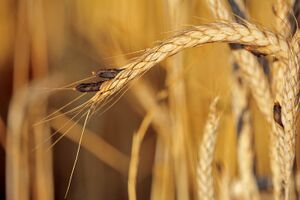 Ergot or ergot fungi refers to a group of fungi of the genus Claviceps.

The most prominent member of this group is Claviceps purpurea ("rye ergot fungus"). This fungus grows on rye and related plants, and produces alkaloids that can cause ergotism in humans and other mammals who consume grains contaminated with its fruiting structure (called ergot sclerotium).[1]

Ergot is the main source of ergotamine and is an ingredient in many lysergamides.

Ergotism is the earliest recorded example of mycotoxicosis, or poisoning caused by toxic molds.[2] Early references to ergotism date back as far as 600 BC, an Assyrian tablet referred to it as a 'noxious pustule in the ear of grain'.[3] In 350 BC, the Parsees described 'noxious grasses that cause pregnant women to drop the womb and die in childbed'.[3]

In ancient Syria, ergot was called 'Daughter of Blood'.[4] Radulf Glaber described an ailment he called 'hidden fire' or ignus ocultus, in which a burning of the limb is followed by its separation from the body, often consuming the victim in one night.[4] In 1588, Johannes Thallius wrote that it is called 'Mother of Rye', or rockenmutter, and is used to halt bleeding.[4]

Human poisoning due to the consumption of rye bread made from ergot-infected grain was common in Europe in the Middle Ages. The first mention of a plague of gangrenous ergotism in Europe comes from Germany in 857, following this France and Scandinavia experienced similar outbreaks;[5] England is noticeably absent from the historical regions affected by ergotism as their main source of food was wheat, which is resistant to ergot fungi.[4]

In 944, a massive outbreak of ergotism caused 40,000 deaths in the regions of Aquitaine, Limousin, Perigord, and Angoumois in France.[2] In Hesse in 1596, Wendelin Thelius was one of the first to attribute ergotism poisoning to grain.[5] In 1778, S. Tessier, observing a huge epidemic in Sologne, France in which more than 8,000 people died, recommended drainage of fields, compulsory cleaning of grain, and the substitution of potatoes for affected grain.[5]