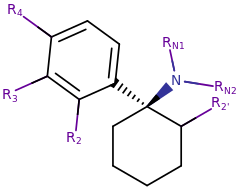 Substitutive structure of an arylcyclohexylamine molecule. Here the aryl is comprised of a phenyl ring.

Arylcyclohexylamine refers to a class of compounds which typically produce dissociation, anesthesia and hallucinogenic effects.

Arylcyclohexylamines are comprised of an amine moiety and an aromatic ring attached to a cyclohexane ring.

Hydrogen atoms around the structure can be substituted for other functional groups to produce drugs of varying potency, affinity, efficacy and half-life.