From PsychonautWiki
< User:Oskykins
Jump to navigation Jump to search

The term dosage refers to the size of a dose of a medicine or drug. In regards to the classification of dosage and their amounts, it can be broken down into microdose, threshold, light, common, strong, heavy, and overdose. Each of these levels result in a different intensification of the compound's desired effects depending on the substance consumed.

Within the context of psychonautic or recreational substance usage, it is important to understand dosages and to pay close attention to them with extreme caution. Administering the wrong dosage of a drug can lead to negative experiences such as extreme anxiety, uncomfortable physical side effects, a bad psychedelic trip, hospitalization, or (in extreme cases) death. Taking too low of a dose can often make people feel uncomfortable and frustrated.

Although different substances induce different effects regardless of their appropriate dosage, the intensity of the experience they are likely to induce can be broken down into five separate categories.

A microdose is a sub-perceptual dose which is so low (such as 10 micrograms of LSD) that it is unlikely to produce whole body effects. Microdosing is sometimes used among athletes, claiming improved stamina and abilities in reaction time, balance, perception, and concentration.

A threshold dose will cause users to experience the effects of the substance in an extremely light and subtle manner which can potentially go completely unnoticed. It is distinctly just beyond that of placebo effect, but can be ignored with minimal effort when one directs their focus towards performing other complex tasks.

A light dose will cause effects which are somewhat distinct and noticeable but still in the background. The effects remain possible to ignore by increasing the focus one directs towards other things when performing complex tasks.

At this point, not only are the effects and the nature of a drug's action quite clear and distinct, but ignoring its action becomes difficult (although possible to varying degrees through consciously focusing on the task at hand). The user will still have some choice as to whether they will accept the experience, or rather just continue with the day's ordinary plans (if you are an experienced user, that is). The effects can be allowed a predominant role or they may be repressed and made secondary to other chosen activities.

A strong dose can be described as that which renders its subject as mostly incapable of functioning normally. Not only is the chronology and the nature of a drug's action quite clear, but ignoring its action is no longer an option. The subject is totally engaged in the experience regardless of the external situation.

At heavy doses, the user has been rendered completely incapable of functioning on any basic level. Depending on the substance consumed, this will usually result in states of safe catatonia or extremely uncomfortable side effects.

An overdose describes the ingestion of a substance in quantities greater than are recommended or generally practiced. An overdose may result in a toxic state or death.

It is important that one avoid dosages which one is uncomfortable or unfamiliar with. An inexperienced user should always start at very low dosages with the goal of working their way up in small increments as they feel comfortable doing so. This should be done by slightly increasing the dosage with each separate experience and never taking great leaps into the unknown.

Doing so allows people to get a feel for the substance that they are using in a controlled setting before they dive into deeper states. For pressed pills or tabs, one should buy from a reliable source with consistent product and ask questions concerning purity and how many milligrams of a drug is in the product.

This minimizes the risk of an accidental negative experience enormously; it is important to remember that everybody reacts differently to every substance depending on factors such as their own personal tolerance, neurophysiology, body weight, metabolism, and personal sensitivity. Another factor to consider is drug purity which differs between batches of product.

For information on the appropriate dosage for any substance, research should be done using a combination of PsychonautWiki, Erowid, Tripsit, Wikipedia and Google.

Some people, especially those with health issues, have adverse reactions to drugs such as allergic reactions, uncomfortable physical or cognitive effects, or over-sensitivity.[1] The best way to prevent this is to perform an allergy test, which is simply dosing a minuscule amount of the drug (1/4 of a regular dose) and waiting several hours to a few days.

When performing an allergy test, one should note any dangerous side effects including rashes, hives, breathing discomfort, an uncomfortably fast heartbeat, or a burning sensation on one's skin.[1] Depending on the severity of symptoms, medical services may be needed.

There are various ways in which users measure their dosages. The most accurate and safe method to measure one's drugs is to use both a milligram scale and the volumetric liquid dosing method. This is a far safer route than "eyeballing" one's dosages by approximating the weight of what they are ingesting simply by looking at it and making a rough (but inaccurate) guess.

Eyeballing is a highly inaccurate method of measuring substances which involves looking at a substance and making a rough guess of the weight. Since there is not much difference between 10mg and 30mg visually, it is highly discouraged.[2] There are numerous forms of eyeballing methods, including using micro scoops and the graph paper method.

Users should not trust a vendor's word that their product weighs a certain amount as it is not unheard of for vendors to accidentally or intentionally give out the wrong amount of a product, resulting in overdoses for some users.[3]

It is especially dangerous to eyeball substances that have extremely low doses (under 10mg). 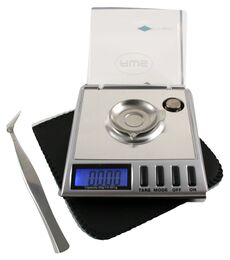 The GEMINI-20 portable milligram scale shown above is a popular scale recommended by Tripsit. These can be purchased here.

When buying chemicals in powdered form, it is strongly recommended that one invest in a reliable and accurate digital milligram scale to ensure that they are ingesting a safe and recommended dosage.

To achieve the most accurate measurement, the scale should only be used on a completely flat surface away from vibrations, wind, and drafts. Low batteries can also affect the scale's accuracy, so one should occasionally replace them.[4]

There are a huge variety of different scales available online through various sites. To choose a quality scale, users should read the reviews before buying and come to their own personal decision. Users should ideally choose a scale that has a 0.001g readability. When using a scale that has 0.005 gram readability (5mg), the weight will be off by 5mg in either direction, meaning that if one measures 20mg of a substance, the results will be between 15-25mg.

For general purpose usage, the following products are recommended by TripSit:[5]

Please note that these milligram scales cannot accurately weigh out doses below 50mg and are highly inaccurate under 10-15mg. For potent drugs, please use volumetric liquid dosing.

Most milligram scales are more accurate in higher ranges (5 - 15 grams) than the lower ranges. Therefore, it is better to weigh one's drug while the 10 gram weight is on the scale. The following steps outline the weighing method for the most accurate measurement:

Volumetric liquid dosing should preferably be used for potent drugs because most standard milligram scales cannot accurately weigh out doses below 10-15mg.[6]

Volumetric liquid dosing is the process of dissolving a compound in a liquid to make it easier to measure. In the interest of harm reduction, it is essential to prepare certain compounds which are too potent to measure with traditional weighing scales within a liquid solution. Please see the above article for more information about this form of measurement.

The method in which a substance has been ingested can greatly impact the potency, duration, and overall experience of a drug. There are also certain health issues associated with some routes of administration.

Frequently insufflating (snorting) substances can damage one's mucous membranes, induce bleeding, damage the nostril's cartilage and lining, burn the throat, and cause other trauma to the nasal passage and sinus area.[7] To reduce damage, it is recommended to grind the substance completely before use, alternate nostrils, and to only insufflate infrequently.[8]

Sublingual administration refers to the absorption under the tongue which can result in a faster absorption than oral use.[9] Caustic substances such as quetiapine or phenibut should not be used sublingually because they can burn the inside of one's mouth if left in one spot for too long.