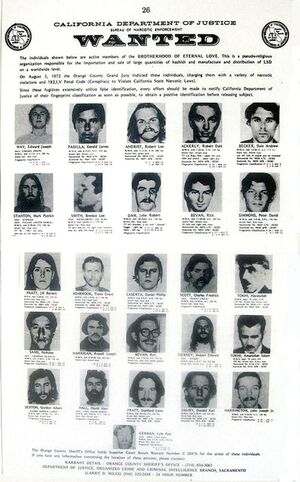 The Brotherhood of Eternal Love, (also known as the "Hippie Mafia" or BEL) was a religious/philosophical organization which initially started as a small commune, but by 1969 evolved to become the notorious "brotherhood" dedicated to the manufacture and widespread distribution of Orange Sunshine LSD at minimal profit, which they funded by simultaneously running the largest marijuana smuggling operation in the US. Much like the motive described in the legal defence written by Richard Kemp, British chemist convicted in the UK Operation Julie arrests, the BEL claimed to be driven their belief that "LSD, through the heightened perceptions and insights it produced, had the potential to radically alter the direction of the human race towards a better pathway for the future".

Their philosophical beliefs/activism, and their association with (Timothy Leary), (who wrote the "Two Commandments for the Molecular Age",in his his 1968 book "The Politics of Ecstasy") are widely thought to have been one the foundations for the modern movementof supporters of the universal human right to Cognitive Liberty

Aldous Huxley was reported to have offered a home for the Brotherhood in Tonga, through Micheal Hollingshead, the man famous for introducing Timothy Leary to LSD, among other things.