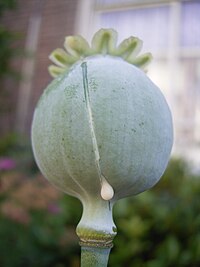 From the earliest finds, opium appears to have had ritual significance, and anthropologists have speculated ancient priests may have used the drug as a proof of healing power.[1] In Egypt, the use of opium was generally restricted to priests, magicians, and warriors, its invention is credited to Thoth, and it was said to have been given by Isis to Ra as treatment for a headache.[2] A figure of the Minoan "goddess of the narcotics", wearing a crown of three opium poppies, BCE, was recovered from the Sanctuary of Gazi, Crete, together with a simple smoking apparatus.[3][4] The Greek gods Hypnos (Sleep), Nyx (Night), and Thanatos (Death) were depicted wreathed in poppies or holding them. Poppies also frequently adorned statues of Apollo, Asklepios, Pluto, Demeter, Aphrodite, Kybele and Isis, symbolizing nocturnal oblivion.[2]. The opium poppy was a magical ritual plant among the Germanic tribes.[5]