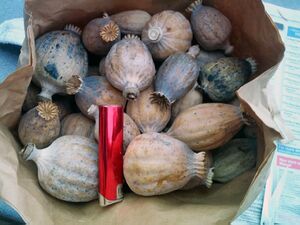 The Poppy plant (Papaver somniferum) is widely known to produce latex in its seed pods, which contain the opiate alkaloids codeine, morphine, and thebaine. Overdose is entirely possible if tolerance is low and too many opiates are consumed, especially due to poppy pod latex containing varying levels of alkaloids. Because of this, it is important to work out a suitable dosage. Reports on Erowid[1] suggest an average dose to be 2-4 large pods; for example, 10 pods weighing 44g, meaning that ~3 pods would be around 15g of powder. 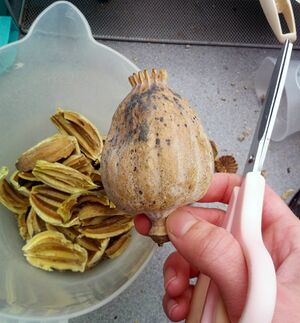 The seeds are removed by cutting off the crown with scissors, to puncture a hole in the pod, then shaking them into a container. They can be stored for later extraction, as the seeds will be coated in latex, or used for cultivating the Papaver somniferum plant.

The pods are tough to break up, so it's wise to cut them as small as you can at this stage. Once the crown is removed, you can cut along the pod lengthwise towards the stem. Make frequent cuts around the pod's circumference then remove the hard stem.

Pods should be inspected individually for mould and insects as accidental consumption can be harmful. Mould is easily identified as grey/green dust or fibres. Black sticky residue is valuable dried latex, which is produced in response to injury.

To raise the surface area available for extracting the alkaloids, and better homogenise the material as to allow for more reliable dose control, the powder is best ground with a powerful blender, as the dried pod material is quite difficult to cut up. 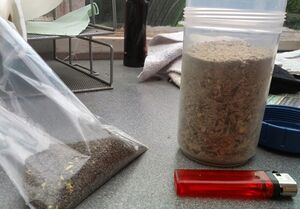 In my example I used 10 large sized pods, weighing in total 44g, so each pod was 4.4g on average. A standard dose is around 10-15g of material. For best results; heat the powder in water which has been acidified with vinegar (acetic acid) or lemon juice (citric acid) for 30 minutes at the least, but preferably two hours. Do not let the water boil, or reach 80°C as the alkaloids will begin to decompose, reducing yield. Stir the material frequently to aid dissolution.

Once brewed thoroughly, use a sieve, a french press, or something similar to filter the plant material from the solution. The material can be pressed to squeeze out absorbed water and washed to extract some of which remains. Discard of the pod material and add something to sweeten the brew to taste. Consume slowly as to identify a suitable dose for future use. The effects should begin fairly quickly, and build in strength slowly. Poppy Pod Tea lasts for several hours due to the morphine content, and synergetic action of other morphinan alkaloids.

From the crude solution of alkaloids, a vaporizable waxy product called opium can be produced by careful filtration and evaporation of the liquid. Smoked alkaloids are faster acting, but have a shorter duration of action and the alkaloids are partly destroyed by the heat. Consuming the solids in a tea or simply swallowing them results in more being absorbed but carries a higher overdose risk if the correct dose is not known.[citation needed]

It has been observed that not many common ornamental pod types contain reasonable levels of alkaloids. Corn Poppies are inactive; they can be identified by their iconic red petals, elongated pods, and dark crowns. P. Somniferum can be identified easily by its grey-green color and usually round pods. Ornamental pods will require larger doses as the alkaloid content is lower than those grown specifically for the latex.

Wet pods may be used just as easily as dry pods, thought the alkaloid content may be lower than when dried.