From PsychonautWiki
(Redirected from Property:Dissociative geometry)
Jump to navigation Jump to search 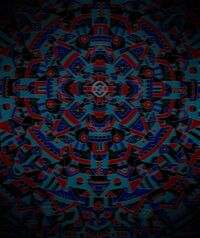 Geometry can be described as the experience of a person’s field of vision being partially or completely encompassed by fast-moving, kaleidoscopic, and indescribably complex geometric patterns, form constants, shapes, fractals, structures, and color.

Geometry never stands still at any point, and is often extremely fast-changing and self-transforming in terms of its shape and style. During this process, the geometry naturally drifts laterally or radially across the visual field to create overlapping webs of many arising and decaying geometric patterns, all of which are visible within a single perceptual frame.

In comparison to psychedelic geometry, the dissociative equivalent is significantly less complex, but primarily immersive in its style. It takes a person's view point directly into the centre of the geometry being displayed, as if the geometry is surrounding the person with 3-dimensional depth with a sense of physical size and distance attributed to them. Psychedelic geometry, however, is primarily non-immersive and therefore displays itself on a veil in front of one's visual field with no sense of particular size attributed to them.

In terms of their stylistic appearance, dissociative geometry also tends to be darker colored and slower in terms of their movement and the way in which they shift in their shape across themselves. These usually only display themselves when the tripper has their eyes closed or are in darkness.

Dissociative geometry can only be broken down into 4 possible levels, as opposed to the 8 differing levels of intensity found within psychedelic geometry. These levels can be broken down and described as: