Amanita pantherina, also known as panther cap or false blusher (due to its similarity to the edible mushroom tree blusher), is a psychoactive mushroom in the Amanita genus. The main psychoactive compound in this mushroom is muscimol. The subjective effects of this mushroom, however, are not similar to psilocybin mushrooms.

The panther cap is an uncommon mushroom, which is found in both deciduous (especially beech) and coniferous woodland. It is rarely found in meadows throughout Europe and western Asia in late summer and autumn. It has also been recorded on Vancouver Island in British Columbia, Canada as well as in South Africa, where it is thought to have been accidentally introduced with trees imported from Europe.

It is an ectomycorrhizal fungus, living in root symbiosis with a tree and deriving photosynthesised nutrients from it while providing soil nutrients in return.

Poisonous, but it's edible when cooked. 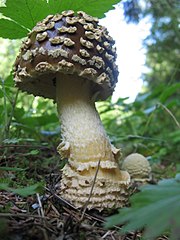 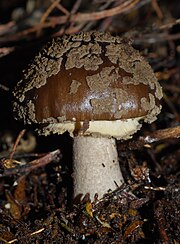 The edibility is unknown.