Ibotenic acid or (S)-2-amino-2-(3-hydroxyisoxazol-5-yl)acetic acid (also referred to as ibotenate) is a psychoactive substance which occurs naturally in Amanita muscaria and related species of mushrooms. It is an analogue of the neurotransmitter glutamate, and due to its structural similarity to this neurotransmitter, acts as a non-selective glutamate receptor agonist.[citation needed]

Ibotenic acid can be a powerful neurotoxin, and is employed as a "brain-lesioning agent" through cranial injections in scientific research.[citation needed] 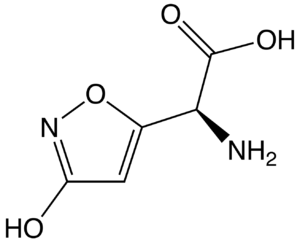 The most common symptoms include nausea, vomiting, and drowsiness. However, after the first hour symptoms begin to include confusion, euphoria, visual and auditory distortions, sensations of floating, and retrograde amnesia.

Symptoms are slightly different for children, typically beginning after 30–180 minutes. Dominant symptoms in children include ataxia, obtundation, and lethargy. Seizures are occasionally reported, however, more commonly with children.[1]