History and culture of alcoholic drinks

Alcoholic beverages have been produced and consumed by humans since the Neolithic Era, from hunter-gatherer communities to nation-states.[1]

In vino veritas is a Latin phrase that means "in wine there is truth." Alcohol given as intravenous ethanol was an early form of truth serum.[2]

Alcohol was brewed as early as 7000 to 6650 BCE in northern China.[3] Beer was likely brewed from barley as early as the sixth century BCE in Egypt.[4] Pliny the Elder wrote about the golden age of winemaking in Rome, the second century BCE, when vineyards were planted.

In colonial America, water contamination was common. Two means to ensure that waterborne illness, for example, typhoid and cholera, was not conveyed by water, was to boil it in the process of making tea or coffee, or to use it to make alcohol. As a result, alcohol consumption was much higher in the nineteenth century than it is today -- 27 liters of pure alcohol per person per year.[5] Before the construction of the Erie Canal, transportation of grain from the west was cost prohibitive; farmers instead converted their grain to alcohol for shipping eastward. This dependence on alcohol as a revenue source led to the Whiskey Rebellion of 1794. Later in the nineteenth-century opposition to alcohol grew in the form of the temperance movement in the United States, culminating in Prohibition in the United States from 1920 to 1933.

Alcohol is the principle that gives to ardent spirit and wine their intoxicating power; while the narcotic principle to opium and tobacco imparts similar properties. In popular language, alcohol is classed among the stimulants; and opium and tobacco among the narcotics; which are substances whose ultimate effect upon the animal system is to produce torpor and insensibility; but taken in small quantities they at first exhilarate. And since alcohol does the same, most medical writers, at the present day, class it among the narcotics. - Edward Hitchcock, American Temperance Society (1830)[6]

Organized crime received a major boost from Prohibition in the United States. American Mafia groups limited their activities to prostitution, gambling, and theft until 1920, when organized bootlegging emerged in response to Prohibition.[7] A profitable, often violent, black market for alcohol flourished. Prohibition provided a financial basis for organized crime to flourish.[8]

Alcohol has sometimes been invested with religious significance. However, the world's religions have had differing relationships with alcohol. Many religions forbid alcoholic consumption or see it sinful or negative. Others have allocated a specific place for it, such as in the Christian practice of using wine during the Eucharist rite. 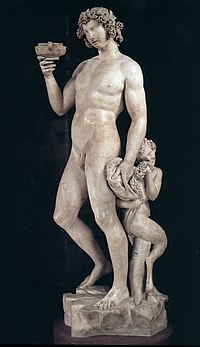 Dionysos, or Bacchus, was known as the god of wine and ritual madness in Greek mythology (Bacchus by Michelangelo 1497).

In ancient Celtic religion, Sucellus or Sucellos was the god of agriculture, forests and alcoholic drinks of the Gauls.

Ninkasi is the ancient Sumerian tutelary goddess of beer.[9]

In the ancient Greco-Roman religion, Dionysos (or Bacchus) was the god of the grape harvest, winemaking, and wine, of ritual madness and religious ecstasy, of merrymaking and bread and circuses. The original rite of Dionysus is associated with a wine cult, and he may have been worshipped as early as c. 1500–1100 BC by Mycenean Greeks. The Dionysian Mysteries were a ritual of ancient Greece and ancient Rome which used intoxicants and other trance-inducing techniques (like dance and music) to remove inhibitions and social constraints, liberating the individual to return to a natural state. In his Laws, Plato said that alcoholic drinking parties should be the basis of any educational system because the alcohol allows relaxation of otherwise fixed views. The Symposium (literally, 'drinking together') was a dramatized account of a drinking party where the participants debated the nature of love.

In the Homeric Hymn to Demeter, a cup of wine is offered to Demeter which she refuses, instead insisting upon a potion of barley, water, and glechon, known as the ceremonial drink Kykeon, an essential part of the Mysteries. The potion has been hypothesized to be an ergot derivative from barley, similar to LSD.[10]

Egyptian pictographs clearly show wine as a finished product around 4000 BC. Osiris, the god who invented beer and brewing, was worshiped throughout the country. The ancient Egyptians made at least 24 types of wine and 17 types of beer. These beverages were used for pleasure, nutrition, rituals, medicine, and payments. They were also stored in the tombs of the deceased for use in the afterlife.[11] The Osirian Mysteries paralleled the Dionysian, according to contemporary Greek and Egyptian observers. Spirit possession involved liberation from civilization's rules and constraints. It celebrated that which was outside civilized society and a return to the source of being, which would later assume mystical overtones. It also involved escaping from the socialized personality and ego into an ecstatic, deified state or the primal herd (sometimes both).

Some scholars have postulated that pagan religions actively promoted alcohol and drunkenness as a means of fostering fertility. Alcohol was believed to increase sexual desire and make it easier to approach another person for sex.