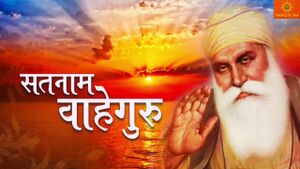 This is a Sikh mantra which literally means Satnam—True Name, Waheguru—The wonderful Guru or teacher. However from religious point of view it means “wahe”—wonderous, “gu” means darkness and “ru”means light, which totally means the wonderful God who removes the darkness of ignorance and through the light shows the path of knowledge, truth and enlightenment. This is also used as a main mantra or mool mantra called as the “gurumantra”.

Sikhism is a monotheistic religion which originated in India during the 15th Century. They believe in one and the Supreme God, who is infinite, has no shape, beginning or end, incomprehensible and invisible. The Guru Granth Sahib which contains the teachings of the main and first guru, Guru Nanak Sahib and the subsequent nine gurus is placed and revered as God. The Sikhs believe in spiritual contemplation through daily nam japa ,meditation, by selfless service to mankind, hard work, honesty, simplicity, forgiveness, sharing and caring with every one and helping the downtrodden and the needy. One should keep away from, lust, greed, anger, ego, materialism. One should follow the five virtues of life namely truth, compassion, contentment, love and humility. Sikhs do not believe in gender discrimination like the Hindus. Since Sikhism originated in India it has Hinduism influence and hence believes in karma, rebirth, and reincarnation.