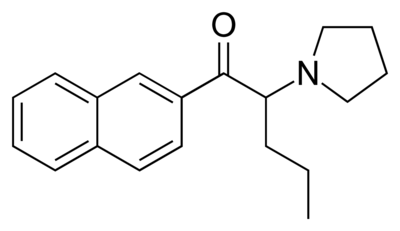 Naphyrone, also known as O-2482, naphthylpyrovalerone, and branded as NRG-1, Energy-1, and Rave, is a novel, extremely potent synthetic stimulant of the cathinone class that produces states of extreme euphoria, disinhibition, and sexual arousal when administered. Naphyrone is thought to act as as a norepinephrine-dopamine-serotonin reuptake inhibitor (NDRI) as well as a releasing agent,[citation needed] and possesses powerful euphoric stimulant qualities. It was first developed in the early 2000's and later saw larger popularity as a legal alternative to mephedrone when it became illegal in the UK in 2010 and in the US in 2011. Naphyrone is considered extremely dangerous because it has a much higher potency than other drugs in the cathinone class meaning an overdose is more likely to occur when compared to other drugs like mephedrone and MDPV.[citation needed] Tests have shown naphyrone to be 13 times stronger than cocaine and more potent than methamphetamine.[citation needed]