Summary of sleep phenomenology and the activation, input-gating and modulation (AIM) model. 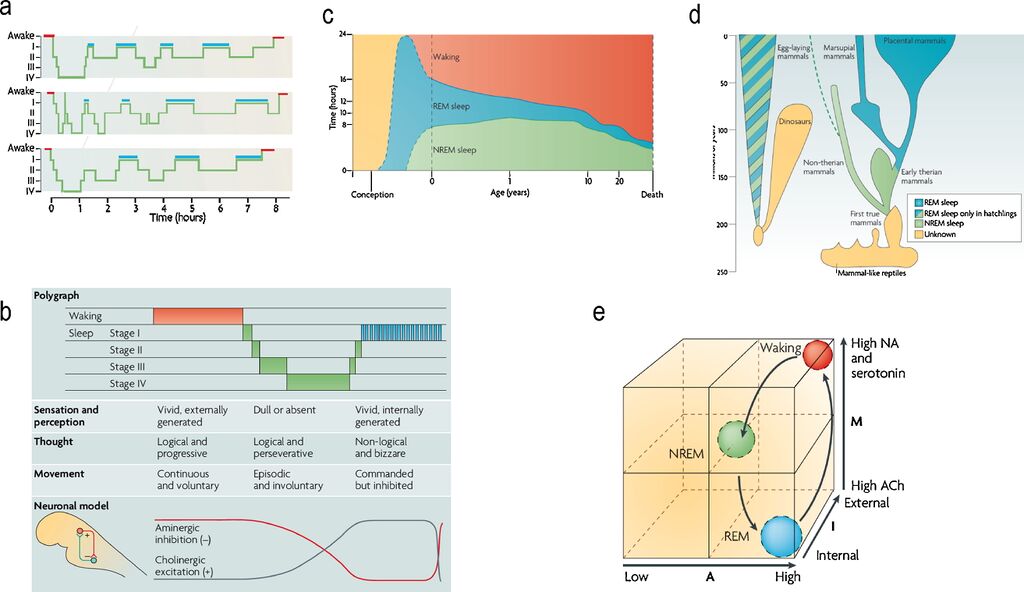 Fig. 1. (a) Standard sleep polygraphic measurements. These traces show 90−100 min cycles of rapid eye movement (REM) and non-rapid eye movement (NREM) sleep. The traces show cycles for three subjects, where the blue lines indicate periods of REM sleep. Reports of dreaming are most common from sleep onset stage I (when dreams tend to be fragmentary), late-night stage II (when dreams tend to be thought-like) and REM (when they tend to be long, vivid, hallucinatory and bizarre). Deep phases of sleep (III and IV) occur in the first half of the night, whereas lighter stages (stages I and II) predominate in the second half. (b) The states of waking and sleep. These states have behavioral, polygraphic and psychological correlates that appear to be orchestrated by a control system in the pontine brainstem. In this panel, the neuronal clock that controls these states is depicted as a reciprocal interaction between inhibitory aminergic neurons and excitatory cholinergic neurons: aminergic activity is highest during waking, declines during NREM sleep and is lowest during REM sleep; whereas cholinergic activity shows the reverse pattern. Changes in sleep phase occur whenever the two activity curves cross; these are also the times when major postural shifts occur. The motor immobility during sleep depends on two different mechanisms: disfacilitation during stages I–IV of NREM sleep and inhibition of motor systems during REM sleep. The motor inhibition during REM sleep prevents motor commands from being executed, so that we do not act out our dreams. (c) Human sleep and age. The preponderance of rapid eye movement (REM) sleep in the last trimester of pregnancy and the first year of life decreases progressively as waking time increases. Note that NREM sleep time, like waking time, increases after birth. Despite its early decline, REM sleep continues to occupy approximately 1.5 h per day throughout life. This suggests that its strongest contribution is during neurodevelopment but that it subsequently plays an indispensable role in adulthood. (d) The evolution of REM sleep. Birds and mammals evolved separately after branching off from the ancestral tree. Both birds and mammals are homoeothermic, and both have appreciable cognitive competence. With respect to the enhancement of cognitive skills by REM, it is significant that both birds and mammals are capable of problem solving and both can communicate verbally. (e) AIM model. This panel illustrates normal transitions within the AIM state-space from waking to NREM and then to REM sleep. The x-axis represents A (for activation), the y-axis represents M (for modulation) and the z-axis represents I (for input–output gating). Waking, NREM sleep and REM sleep occupy distinct loci in this space. Waking and REM sleep have high activation but different I and M values. Thus, in REM sleep, the brain is both off-line and chemically differentiated compared with the waking brain. NREM sleep is positioned in the centre of the space because it is intermediate in all quantitative respects between waking and REM sleep.

Under a creative commons license. (Lots of good phenomenology and neurology in this paper)