LSD changes how your brain connects to the thalamus

"In addition, LSD-induced RSFC [Resting State Functional Connectivity] between the thalamus and right fusiform gyrus and insula correlated with subjective visual and auditory alterations, respectively (Mueller et al, 2017b). Remaining to be determined is the way in which LSD-induced increases in thalamocortical connectivity may be linked to the thalamic gating of perceptions (Mueller et al, 2017b). In contrast to the higher connectivity between neural networks while under the effects of LSD, LSD globally decreased within-network RSFC (integrity) and within-network signal variance (Carhart-Harris et al, 2016c) (Figure 2a). 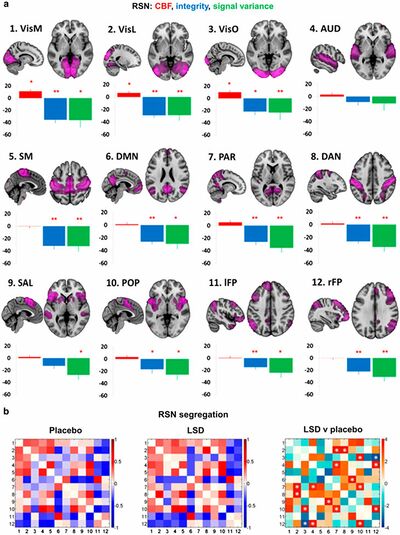 Hallucinogen distortions are from disrupted synchrony of your neurons

pg 634 "Hallucinogens disrupt PFC network activity, and after administration of hallucinogens, individual pyramidal neurons are less likely to fire in synchrony with other pyramidal neurons, and low-frequency network activity is attenuated. Since the efficiency of cortical information processing is dependent on cortical synchrony, these effects could markedly alter how the PFC functions. Furthermore, the increase in recurrent cortical network activity induced by hallucinogens could compete with responses induced by sensory input, potentially altering sensory processing. Since pyramidal neurons in PFC layer V are the source of projections to other cortical and subcortical structures, hallucinogen effects on PFC activity and processing could profoundly affect how the PFC regulates activity in those projection sites. For example, systemic administration of DOI to rats increases the output of mPFC neurons projecting to DRN and the VTA in the midbrain, which give rise to serotonergic and dopaminergic projections, respectively. It has been proposed that one of the major effects of hallucinogens may be to alter the function of cortico-striato-thalamic pathways (CSTC loops) that regulate the gating of cortical information processing. Altered activity in these circuits, due to the direct and indirect effects of hallucinogens on their cortical and subcortical components, could produce gating deficits that would result in sensory overload, hallucinations, and disruptions of normal cognitive processes. Indeed, one of the known effects of hallucinogens in humans and rodents is disruption of measures of sensorimotor gating such as prepulse inhibition. The hypothesis that hallucinogens act by disrupting CSTC feedback loops has received some support from imaging studies showing that psilocybin alters activity in cortical and subcortical components of the “limbic” CSTC loop."[2]