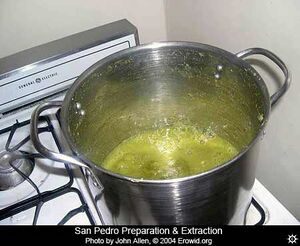 For 1 dose of mescaline, you will need:

The cactus should be sliced up into star-shaped sections and then further sliced into smaller pieces so that they can fit into the blender. The mixture should be blended thoroughly and should have hardly any lumps of cactus in the mixture as the more lumps of cactus there are in the mixture, the longer the mixture would need to be boiled for. (The spines of the cactus can be left on before being cut up and blended as they will become soft during the boiling process and then strained out of the mixture at the end.)

The cactus chunks should be placed into the blender and roughly the same amount of water should be poured in. The mixture should be then blended and put into the cooking pot.

The blended cactus and water mixture is then cooked slowly on a low heat.

As the mixture cooks, the cactus pulp separates from the water and sits on top of the liquid; this will look like gooey green foam and may spill over the top of the pot as it first starts to cook, so the mixture will need to be monitored closely for the first half an hour.

As the mixtures continues to cook, the foam should then start to mix into the liquid again, and should start to look more like a liquid rather than a foam.

After the mixture has become less foamy and frothy, the heat can be increased slightly so that the mixture starts to boil lightly, The mixture needs to be boiled for 2 to 4 hours until there is roughly 1/5 of the mixture left at the bottom of the pot. This will look quite gooey.

If there is still more than 1/5 left in the pot, the mixture can be boiled for longer but must be stirred more as the mixture will start to sit at the bottom of the pot and possibly start to burn.

A clean piece of cloth is then placed over the top of the blender acting as a filter. The mixture is then poured from the pot into the cloth slowly bit by bit. Once all of the mixture has been poured into the cloth, it can be then tied at the top. Afterwards, it will need to be suspended in the air over the blender using some string or some other piece of cloth, so that the juice can be drained from the pulp. After 15 minutes, once the mixture has cooled down enough, the remaining liquid can then just be squeezed by hand from the cloth into the blender.

The liquid needs to sit so it can cool down further, once cooled down it can be then poured into a cup.

But 1 to 2 foot of San Pedro is recommended.

The liquid will have quite a bitter taste to it, but water can be drunk in-between each sip. The liquid can also be consumed over a period of half an hour if need be.

Mescaline can cause quite a bit of nausea. Good weed should help this drastically.