Psychotria viridis (also known as Chacruna) is a plant in the Psychotria genus and the Rubiaceae family. It is an additive to the ayahuasca brew as a source of DMT.

The leaves contain 0.1 to 0.61% N,N-DMT among trace amount of other alkaloids such as beta-carbolines, MMT and MTHC.[1]. The alkaloid content is said to be highest in the morning.[citation needed] 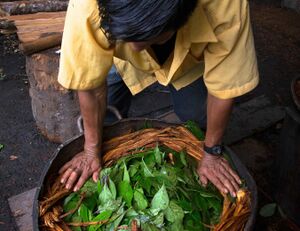 A shaman preparing the Ayahuasca brew by mixing chacruna leaves with ayahuasca (B. caapi) barks.

P. Viridis can be propagated from cuttings. They can grow from cuttings of a branch or from a single leaf which is a rare phenomenon in nature. The seeds are not a viable way of growing this plant as it can take up to 6 months for a seed to germinate compared to the few weeks for a cutting of a leaf.

Psychotria viridis is currently legal in most countries except France. France is one of the few countries that both DMT and DMT containing plants are illegal. In the United States the plant itself is legal but the creation of ayahuasca (except for religious use) is illegal. The plant is legal in Australia but its import and export are illegal.