A neuron, also known as a neurone or nerve cell, is an electrically excitable cell that processes and transmits information through electrical and chemical signals. A chemical signal occurs via a synapse, a specialized connection with other cells. Neurons connect to each other to form neural networks. Neurons are the core components of the nervous system, which includes the brain, spinal cord, and peripheral ganglia.

A number of specialized types of neurons exist. Sensory neurons respond to touch, sound, light and numerous other stimuli affecting cells of the sensory organs that then send signals to the spinal cord and brain. Motor neurons receive signals from the brain and spinal cord, cause muscle contractions, and affect glands. Interneurons connect neurons to other neurons within the same region of the brain or spinal cord. 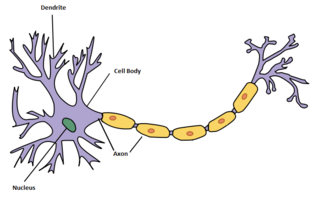 A typical neuron possesses a cell body (often called the soma), dendrites, and an axon. Dendrites are thin structures that arise from the cell body, often extending for hundreds of micrometres, branching multiple times and giving rise to a complex "dendritic tree." An axon is a special cellular extension that arises from the cell body at a site called the axon hillock and travels for a distance. At the majority of synapses, signals are sent from the axon of one neuron to a dendrite of another. There are, however, many exceptions to these rules. For example, there are neurons that lack dendrites, neurons that have no axon, and synapses that connect an axon to another axon or a dendrite to another dendrite, etc. 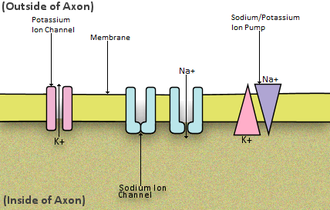 Structure of an axon membrane

All neurons are electrically excitable, maintaining voltage gradients across their membranes by means of metabolically driven ion pumps which combine with ion channels embedded in the membrane to generate intracellular-versus-extracellular concentration differences of ions such as sodium, potassium, chloride, and calcium. Changes in the cross-membrane voltage can alter the function of voltage-dependent ion channels. If the voltage changes by a large enough amount, an "all-or-nothing" electrochemical pulse called an action potential is generated which travels rapidly along the cell's axon, and activates synaptic connections with other cells when it arrives.

Mechanism of propagation of action potentials

The inside of the axon is negatively charged compared with the outside of the axon. The change in potential difference that is needed to fire off an action potential is controlled by the movement of sodium and potassium ions (an ion is a positively or negatively charged molecule) in and out of the axon. This movement occurs via the action of ion pumps and channels. The ions cannot just diffuse in and out of the axon uncontrollably; this diffusion is prevented by a membrane around the axon. Periodically placed along the membrane are proteins that act as channels for ions to pass through. Sodium gated channels and potassium gated channels open and close to allow the ions to pass through only at specific times. Sodium-potassium pumps transport both Na+ and K+ in and out of the axon.

Once an action potential has been established, it “moves” along the axon in a neuron. The action potential does not move in a physical sense of the word; the reversal of electrical charge is instead reproduced at different points along the axon in a “Mexican wave” effect. One point in an axon will become depolarised (depolarisation is a change in a cell’s membrane potential, making it more positive or less negative), and this depolarisation is a stimulus for the next region of the axon to depolarise. As the next region depolarises, the previous region returns to normal and repolarises. Eventually, the action potential will reach the end of an axon, known as a synaptic knob.

When an action potential has passed, the cell restores the resting potential of -65mV through two transmembrane proteins: voltage gated potassium channels, and Na+/K+ ATPase (sodium/potassium pump). The potassium channels are voltage sensitive and open when an action potential occurs and peaks, they open while the Sodium channels become inactive at peak voltage. This drives the cell back to resting potential, and also ensures there is a refractory period after each action potential, because the sodium channels must go from their closed (high voltage) conformation to inactive (low voltage) before they can be opened again with proper depolarization. The sodium-potassium pump uses energy to actively, constantly pump sodium out of and potassium into the cell - the image on the right has the right idea, however, it has the directions backwards. [Someone capable please edit and fix the image]

Action upon other neurons