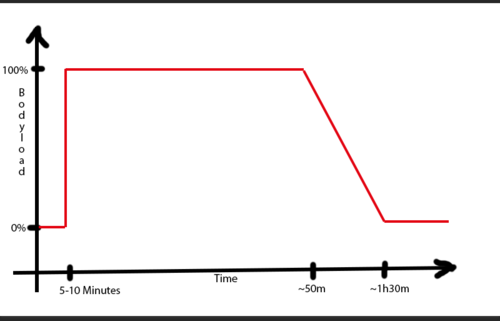 I haven't written a trip report in quite some time, but this experience was something really special and outstanding. At the time of the experience and me writing this report I am a 25 year old male. I am 6'2 tall and weight around 270 pounds. I take only asthma medication regularly (salbutamol, fluticasone/salmeterol and montelukast), which seem to to have no interaction with any of my drug experiences. I don't know how valuable these informations are but I try to give as much insight to this experience as possible.

I did not add any other substances to that experience besides my vaping pen, with 1.5mg/ml nicotine liquid in it. I had experience with psychedelics for little over a year now and about once or twice per month. Including high and low doses of LSD, 2C-B and 4-aco-dmt all taken orally and in different settings (nature/festivals/at home/...). Also I tried DMT twice before 20/35mg vaporized in a pipe. Some of my experiences were mixed with cannabis (smoked) on the tail end of the peak, without ever having problems. Boofing/plugging never seemed compelling to me. I just could not wrap my head around the concept. In the end the experience of doing it was not as bad as expected. It's way more unpleasureable to think about it than actually doing it. Still, I had the prepared syringe laying on my table for almost an hour until I finally got myself to do it. Making a way bigger deal out of it than it actually was.

I already had experience with 4-aco-dmt prior to that, almost took double the dose orally (~65mg) thinking I was cool with that dosage boofed/plugged. I did not do too much preparation for this trip, except for having something to drink ready, thinking I could handle myself and guide that trip. Oh how wrong I was! Took it at evening and alone, with no appointments on the next day.

t+2-3 minutes I already felt a tingling sensation all around my body, slowly realizing that everything got a bit overwhelming. I was in a voice chat (Discord) at that time with some people and was slowly not able to fully follow their conversations anymore. So I decided to move to a private channel and waiting for it to kick in. Had my seat rocking back and my feet resting on my table.

t+5-10 minutes I was totally not prepared what was about to come. Before I could put on any music etc. it hit me like a truck. I was peaking after max. 5-10 minutes. It’s hard to find a proper time window, when it actually happened, since everything was so fast and at once. The bodyload I had was unbelievable. It felt like a warm strong force pulling my whole body down into my chair endlessly (in a positive way, it felt great). Making me unable to move. I instantly regretted not starting this trip in my bed or on my couch, but it did not bother me too much.

Orally taken 4-aco-dmt felt to me like LSD with a little less control (people compare it with mushrooms, but I have no reference to that since I never tried them) and a generally warm feeling (mild bodyload) all around you. But boofed/plugged everything felt like a full DMT experience, stretched over a really long time period. I was scared letting my thoughts flow freely and giving in on the substance, but I think if I would have been a little bit more chilled/relaxed about it and giving in to the substance this could very easily have been a breakthrough experience.

I was panicking a lot, feeling this trip goes downhill really fast, not expecting these strong and clearly different effects, of what I normally was used to from 4-aco-dmt. I was alone for about 5 minutes in that voice channel, hoping someone will hop on and help me out. I was so relieved that a friend of mine switched into the channel with me and cared about me. Putting on music for me via our music-bot when I clearly was not able to. Speaking to me in a calming voice that everything is going to be okay. I don’t know how this trip would have ended or what I would have done without him. I clearly did not want to be alone at this moment and once I had company and music I was able to relax a lot. I cannot thank him enough! I was able to speak somewhat but most of my words did not make sense and ended up being a bunch of mumbling.

The visuals were intense, nothing I had ever seen before. everything looked like in had a colorful net/fence over it. Almost like a blanket and this blanket moved like a liquid with a high viscosity, almost like hot tar, combined with the movement of the waves on the ocean. It is really hard to describe. When I kicked back and closed my eyes, the closed eye visuals seemed almost real. They were red/white looking like an endless flow of geometric strawberry-vanilla ice-cream. I know it sounds weird, but I can’t find more matching words. I could talk for hours about my visuals, but I got so many different overlaying and closed eye visuals that it is hard to remember for me how everything looked. Morphing was not really present, everything behind the overlaying visuals seemed still to be the real world. Let’s ´just put it this way: IT WAS FANTASTIC!

t+~1h20m The bodyload was finally down to a manageable level, but the mindtrip and visuals were still pretty strong. I was finally able to move again and control my PC somewhat, most of the programs (like Discord), did still make 0 sense to me. I was like “did Discord always look this way, wtf”. I still was not able to comprehend the majority of my perception and it was hard for me to interpret anything that was going on. Was somehow able to hop on togethertube (a site to watch videos together) and finally listen to music in a bit higher quality. Was a super pleasurable experience from this point and my friend was still guiding my trip in the voicechat.

t+~2h30m I was finally able to switch to my bed and listen to music, but then I suddenly felt completely sober again, without any signs of a comedown or a afterglow. I just felt sober again, not being interested in music anymore. Thinking the experience was over. I had a bit of a spacey feeling in the back of my head. The same I got when I tried DMT before. But not a afterglow or comedown I am used from other psychedelics.

t+3h I suddenly stopped feeling sober again and the mindtrip started to come back in waves. It felt more like an LSD comedown underlayed with weed. I had long philosophical thoughts for some minutes followed by feelings of coming down again. Had that again and again on and off for almost 3 hours. (2C-B does the same thing with me that it happens in waves and I feel sober again and then not, but not with a mindtrip.) Visuals or bodyload did not come back at any point.

t+6h I felt completely sober again, only a bit stimulated. But I was tired and wanted to sleep. was able to find some sleep within an hour.

A lot of other stuff happened on this trip inside and outside of my head, but I spare you the details. It would just be and endless read. I expected a LSD/shroom-like trip, that is still controllable, but what I got was an experience that you could more Associated with a full featured DMT-experience stretched out over a longer time! For sure I did not expect feeling incapacitated for such a long time! It was not a bad feeling at all, but totally unexpected!

After all it was a indescribable and incredible nice experience. I will definitely redo this once the tolerance is down, but with proper preparation. Just like I would prepare a DMT experience. With a headset already on and playing music so I don’t have to worry about anything once it kicks in and I can just lay back and fall endlessly into my bed. Now I know what I have to look out for and what awaits me with when I repeat it, so I feel confident starting this without a tripsitter / friend next time. Definitely not a social experience or one you do out in nature/puplic. I was super glad in the end I had company and did not get lost in a bad trip. Also I made a little graph, trying to explain how the bodyload worked, since it was one of the most profound things on the experience:

The trip clearly has changed something in me that carries on today, something positive. A feeling like I had after my very first LSD experience. I cant put my finger on it for now! Think I have to think a little longer about it. I am glad afterall I did it!