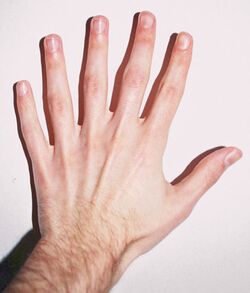 Dream signs are any events which may signify that you are dreaming. These may include impossibilities, improbabilities, incongruous features, or surreal feelings. An oneironaut may make use of a dream journal to note their dream signs and be better prepared to notice them another time. When one does notice a dream sign, it is a good time to reality check, as these events will often cause one to question reality and whether they are awake or asleep.

These events defy well established laws of science, such things happen often in dreams. Examples of some types of impossibilities that may be experienced in dreams include:

Ability to control reality with willpower

Things disappearing in one place and reappearing elsewhere

Things vanishing or coming from nowhere

Things containing more than they should be able to

Folding of space between large distances

Being able to pass through solid objects

Improbabilities are events that are known to be possible in waking life but are also highly unlikely to occur. This is not necessarily a definitive dream sign, but since the laws of probability do not apply in dreams, such events may occur at very different intervals to what one might expect. Examples of some types of improbabilities that may be experienced in dreams include:

Incongruous features are when something is drastically different than it is usually expected to be. Sometimes these kinds of events do happen in waking life, though there is always a logical explanation for their occurrence, though you may not be aware of it, however dreams do not necessarily have a logical explanation behind such events. Examples of some types of incongruous features that may be experienced in dreams include:

Changes when you double take

Surreal feelings are experiences that seem out of the ordinary, though these can be triggered by hallucinations, lapses in memory, or sudden changes -so they may not necessarily be definitive signs you are dreaming. Examples of some types of Surreal feelings that may be experienced in dreams include:

Events seem to be a commentary on your thoughts

The overwhelming sense that this has happened before (déjà vu)

The general notion that there is something bizarre going on

Witnessing things that you can not comprehend