Mandrakes are very poisonous and known to cause dangerous and extremely unpleasant experiences.

Please use responsible use practices when trying this drug and always have a trip sitter.

Mandragora is a plant genus belonging to the nightshade family (Solanaceae). Members of this genus are known as mandrakes. Like many members of the Solanaceae, species of mandragora contain tropane alkaloids, making them poisonous and deliriant. 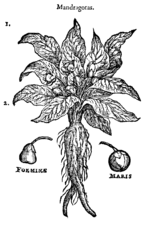 The so-called "female" and "male" mandrakes from a 1583 illustration.

Mandrake has a long history of medicinal use, although superstition has played a large part in the uses to which it has been applied.

The root is hallucinogenic and narcotic. In sufficient quantities, it induces a state of unconsciousness and was used as an anaesthetic for surgery in ancient times. In the past, juice from the finely grated root was applied externally to relieve rheumatic pains. It was also used internally to treat melancholy, convulsions, and mania. When taken internally in large doses, however, it is said to excite delirium and madness.

In the past, mandrake was often made into amulets which were believed to bring good fortune or cure sterility. In one superstition, people who pull up this root will be condemned to hell, and the mandrake root would scream as it was pulled from the ground, killing anyone who heard it. Therefore, in the past, people have tied the roots to the bodies of animals and then used these animals to pull the roots from the soil.