San Pedro is benefited by the addition of diluted liquid fertilizer added to the water every second or third watering during their growing season. Any standard houseplant fertilizer with balanced amounts of nitrogen, phosphorous and potash (20-20-20) can be used.

The substrate is more effective when containing rotting sources of carbon, fresh sources will rob nitrogen from the plants as soil microorganisms try to break it down. Poorly made compost (anaerobic decomposition) can be harmful as it is full of pathogenic organisms. 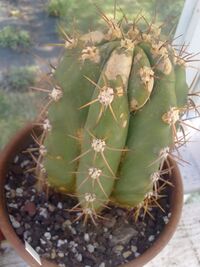 Rot caused by over watering 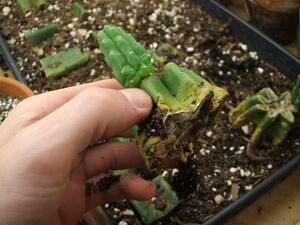 Like many other plants, Echinopsis pachanoi can be propagated from cuttings. The result is a genetic clone of the parent plant. For example, the top 15 cm end of a cactus column can be cut off with a clean and sterilized knife (It can be sterilized with ethanol or fire), then the cutting can be left to dry for about two weeks in the shade, or in a dry place. This is so that the surface of the cut end dries out like paper forming a seal to keep out microbes such as fungi and bacteria. The cutting can then be dipped in rooting hormone (optional, but effective) and planted on the surface of or buried to a maximum of 2.5 cm deep in good propagation media mixed with some sand and perlite. The sand and perlite will ensure that the media will drain and not stay too wet. The cutting is kept in the shade or indirect sunlight, so that the root system can develop and the cactus does not grow too thinly. It is best to withhold watering for first two week to encourage the root to grow. The moisture in the media alone is sufficient to begin the formation of adventitious roots. Lightly tug on the cactus to check for root formation. Do not attempt to pull the cactus all the way out of the soil to examine it. You will damage any roots that may have already begun to form. After about six months, significant roots will have formed and the cutting can be repotted in the same type of medium. 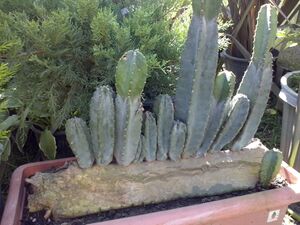 A long cactus column can be laid on its side on the ground (like a log), and eventually roots will sprout from it and grow into the ground. After time, sprouts will form and cactus columns will grow upward out of it along its length.

Growing from seeds is a little bit more difficult and it is slower than the cutting method. Seeds need several months to germinate and develop roots. 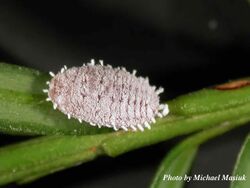 Mealybugs are insects in the family Pseudococcidae, unarmored scale insects found in moist, warm climates. They are considered pests as they feed on plant juices of greenhouse plants, house plants and subtropical trees and also act as a vector for several plant diseases. because of the protection layer these insects make, contact pesticides will not kill them, therefor a systemic pesticide should be used.

Most cacti, including San Pedro are essentially dormant during the winter. Because they aren't growing, they need very little water and no fertilizer, and they thrive on cool temperatures. In winter San Pedro need only a light watering every few weeks to dampen the roots slightly and keep the plants from shriveling. During this time even once-a-week watering may be too much and over-watered plants may rot.

A very hot climate or stress caused by changed pot or climate also can put the plant in dormancy state.