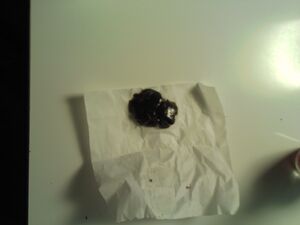 Black tar heroin in this form must be dissolved into water before it can be snorted.

Black tar heroin often comes in a form that is initially unable to be insufflated ("snorted"). This is due to the sticky consistency of this substance. For this reason, many believe that smoking or injecting is the only valid routes of administration for this form of heroin; however, this is untrue.

This is a guide designed to introduce insufflation as a viable routes of administration for a user of black tar heroin.

For more information on the psychoactive effects of heroin, please see its subjective effect profile.

A nasal irrigator can be used after insufflation to clean the sinuses of any impurities in the drug solution.